The model and cookbook author confirmed she got her implants removed last month, writing, "Surgery went perfectly!" on Instagram

Chrissy Teigen is showing off her new body after having her breast implants removed earlier this year.

The model and cookbook author, 34, posted a topless video to her Instagram Story on Sunday wearing nothing but high-waisted black leggings. In the risqué clip, Teigen is standing in front of a long mirror while swaying her hips back and forth and saying “Versace, Versace, Versace."

The notoriously candid star has always been open about her plastic surgery journey, and even told social media followers last month that she might get a second surgery because “I did not expect that [my breasts] would still be this large.”

In a series of Instagram Stories, Teigen wore a white festival-inspired tank top and an intricate gold body chain that is supposed to fit “over each t**** but my boobs are too low.”

“And yes, they’re still huge,” the Cravings cookbook author said of her new breasts. Adding, “I think I honestly will do it again and have them make them smaller.”

In June, the model confirmed she got her implants removed after announcing "I’m getting my boobs out!" on Instagram in May.

"So so so so so sore but waking up to this made it go away for half a minute at least," she added, sharing two photos of the adorable homemade cards her two children — daughter Luna Simone, 4, and son Miles Theodore, 2, whom she shares with husband John Legend — made for her ahead of the operation.

Teigen first revealed she had breast implants in an interview with Glamour UK in March, explaining that she underwent the plastic surgery when she was 20.

"It was more for a swimsuit thing," Teigen, who made her modeling debut in the 2010 Sports Illustrated Swimsuit Issue, told the outlet. "I thought if I’m going to be posing, laid on my back, I want them to be perky! But then you have babies and they fill up with milk and deflate and now I am screwed." 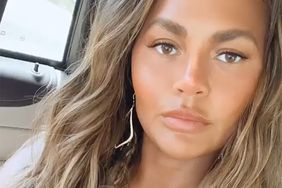 Chrissy Teigen Reveals She Might Get Another Breast Reduction Because 'Yes, They're Still Huge' 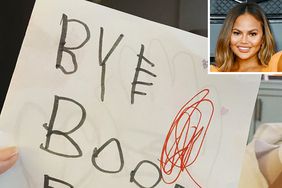 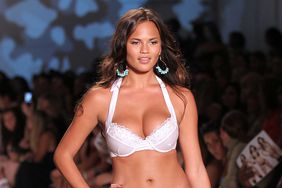 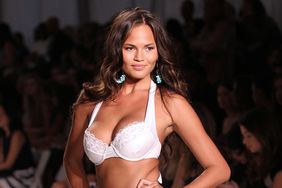 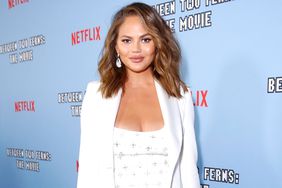