Could the couple's latest selfie mean they're engaged?

Ever since Brooklyn Beckham and Chloë Grace Moretz rekindled their romance this fall, things have been moving fast. They made it official in one of the cutest couple matching outfits of the year and have been posting photos of one another just about every day on Instagram. And their latest snap is hinting that they might have reached the most major milestone yet — an engagement!

Moretz shared a selfie with Beckham wearing matching signet rings on their ring fingers (!), featuring one another’s first initials, a C on Beckham’s and a B on Moretz’s.

The cryptic pic shows Moretz covering her lips like she’s keeping a secret and Beckham hiding a smirk on his face. And while it’s not clear whether the bands are promise rings or mean something more, the two are having fun keeping the public guessing.

Before posting a photo of their rings, Moretz shared a snap of Brooklyn with the caption, “I will.”

And last year the two played a prank on Beckham’s mom, Victoria Beckham, by making her believe their engagement rumors were true. Moretz told Glamour that Brooklyn took a photo of “the ring” and sent it to his mom saying, “The rumors are true!”

“Sometimes, we’ll just look at each other and laugh,” Moretz said.

These days Moretz and Victoria have the same playful relationship. Last week the designer posted a photo comparing Brooklyn’s wild hair to Dennis the Menace writing, “That hair!!! @chloegmoretz what have u done!! 😂😂😂 kisses x”

Thanks to those laugh-crying emojis and Moretz’s comment, “Hahahah ohhhhh my god,” it’s all in good fun. 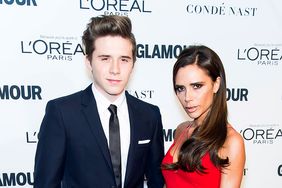