Legends Only: Paulina Porizkova, Suzanne Somers and More Celebs Over 50 Who Posed Nude

From magazine covers to Instagram thirst traps, these stars aren't afraid to bare it all

The model has an archive of Instagram photos that prove age is just a number and angles are everything. Her most recent? A bathroom butt selfie (AKA a "belfie") she snapped during a trip to Rome. "My hotel Eden in Rome, has, besides a beautiful room I'm staying in, this pretty happening bathroom. After work and a leisurely bath, I was bored, which led to this celebration of narcissism, the naked selfie," she captioned the risqué photo.

In 2019, the Three's Company star famously posed topless in a sultry Instagram photo shot by her husband of 42 years, Alan Hamel.

"We were walking on the hillside road [on her property] and I think it was like June. It was hot and dry," she later explained. "I said, 'Oh my god, the foliage here is the same color as my hair.' Because, by that time, all the weeds and bushes had turned yellow."

"So I got down and said, 'Take a picture of me. The weeds will look like my hair,'" Somers said. "I took my top down because I was with my husband, and he took that great picture."

The supermodel posed topless on the cover of i-D magazine's Spring issue, which was released in February. She also risked it all in the name of fashion when she went nude in the notoriously dirty New York City Subway for Valentino's Pre-Fall 2019 accessories campaign last summer. Campbell sat on the train — sans clothing! — with just a black studded handbag draped on her shoulder for the spot. She was also photographed waiting on the platform using only a bag to cover herself.

The Oscar winner has posted several jaw-dropping Instagram photos lately, including this topless shot snapped from behind and appropriately captioned, "naked truth…" Berry also went braless during a recent campaign shoot for her lifestyle and wellness brand Re-spin.

The actress often flaunts her impressive figure on Instagram in tiny bikinis, figure-hugging silhouettes and dresses with plunging necklines. In March, the bombshell shared a photo of herself sitting on a bed of hay totally nude...beauty is pain, right? A few months prior, she posted this topless snap with the caption, "How could I resist?" Touché, Liz. Touché.

The supermodel stripped down for her Harper's Bazaar Spain's cover shoot. Inside the August 2020 issue, Christensen was photographed swimming completely nude, wearing a striking red lipstick and shimmery eyeshadow. She's since bared her assets on Instagram, often modeling sexy pieces from her Staerk & Christensen ready-to-wear collection.

The supermodel landed the Vogue Italia's August 2019 issue alongside fellow '90s icon Claudia Schiffer for which they each took their own selfies — while nearly naked. Seymour posed nude in one photo, wearing only a necklace and black belt while a camera tripod was strategically-placed to cover her nether regions. In the second pic, she donned a feathery green coat with black dotted tights, while striking a dramatic pose. 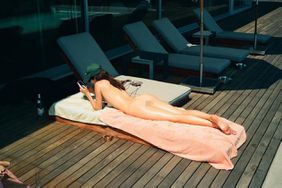 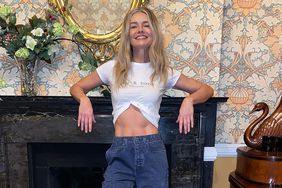 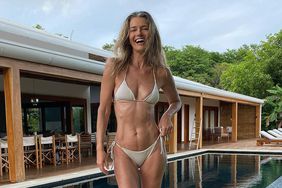