Vote on this week's styles including Paris Hilton, Penélope Cruz and 28 more stars! You decide – are they fashionistas or flops? By Melissa Liebling-Goldberg

The heiress makes a sophisticated entrance into The Late Show with David Letterman in a paneled bustier and pencil skirt.

The Spanish star celebrates the shooting of her new film with Pedro Almédovar in a chic belted little black dress in Madrid.

The actress brightens up a Ferragamo party in N.Y.C. in a blue striped dress by the Italian label.

Peet goes for the layered look at the opening of the Rogan for Target boutique at Barneys New York.

The new mom turns up in a mixed-print Elizabeth and James dress, black Tom Ford fedora and vintage Gucci boots for classes at traffic school in L.A.

The country singer is all uptown-chic in her glittering metallic Badgley Mischka shift at the 5th Annual Event to Prevent Benefit in New York.

The actress is honored as MaxMara’s “Face of the Future” in a abstract-print dress in Los Angeles.

Another day, another pair of puzzling pants! The fashionista turns up in baggy high-waisted pants and a floral bustier to the 5th Annual Event to Prevent Benefit in New York.

How to avoid wearing a wedding band? Cover up with short gloves instead! The newlywed adds major Chanel bling to her little dress and gloves at a bash thrown by Jay-Z in N.Y.C.

The new mom enjoys night out at a party for Stella McCartney in a simple white dress and cropped black jacket by the designer.

The model wears a feathered black vest and skinny jeans to celebrate her new Agent Provocateur ads at an N.Y.C. bash.

Theron stays bundled up in her black coat at the Stella McCartney party in Los Angeles.

Following a night out at the Met Costume Institute Gala, the actress blooms in a floral Balenciaga dress at a spring lunch honoring Antony Todd. The event – held in N.Y.C.’s Grand Central Station – was hosted by “A Diamond Is Forever.”

The actress turns up at a Allure photo exhibition of nudes with her black satin strapless Celine dress firmly on.

Harmon gets bold in a Stella McCartney floral jumpsuit at the designer’s L.A. party.

Talk about style superpowers! As a guest of Chanel, the lucky actress hand-picked her sequined vintage Chanel Haute Couture dress from the ’80s archives to match the superhero theme of the Met Costume Institute’s annual gala in N.Y.C.

Skipping the Costume Institute bash, the actress leaves TRL in bold red heels and black J Brand skinny pants with her What Happens In Vegas costar.

Barton attends the Met gala in a custom-made Missoni gown with ruffled straps and a beaded bodice and Bulgari jewels.

On the West Coast, the heiress mixes her florals with a printed dress and clutch for the Hornitos Tequila Cinco de Mayo party in Hollywood.

Showing off a banged bob, the actress keeps covered in her geometric print Pucci gown for the annual Met gala.

Still no sign of a baby bump! The petite singer adds a rock ‘n’ roll edge to a chic high-waisted pencil skirt with white pumps, a scarf and long beads for the Bravo Supershow in Germany.

Taking a break from the Speed Racer red carpet, the actress attends the Costume Institute bash in a sweeping Givenchy gown and Bulgari jewels.

Giddy-up! The reality star adds on a bold pink hat to her strapless Ralph Lauren floral dress at the Kentucky Derby.

The heiress is a riot of color and print on the Race to Erase MS red carpet in L.A.

Sims gets into the spirit at the Kentucky Derby in her oversize black Eric Javits hat and feminine Ports 1961 gray dress.

The actress makes a low-key style statement in skinny jeans and an ombré top at the opening night of Boeing-Boeing on Broadway. 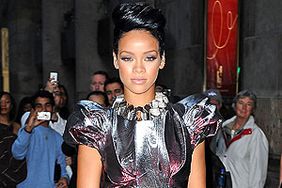 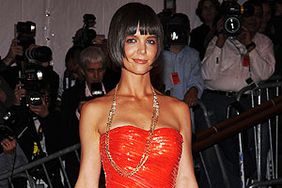