Some of the biggest names in fashion were in attendance to honor the life and legacy of Karl Lagerfeld on Thursday.

The memorial service, “Karl For Ever,” took place at the Grand Palais in Paris and featured appearances by many stars in the fashion industry, commemorating the late Lagerfeld, who died on February 19 at the age of 85.

Cara Delevingne honored Lagerfeld with a poem written by French writer Colette, which was one of the fashion icon’s favorite authors, according to Women’s Wear Daily.

For the reading, Delevingne, 26, who recently went public with her relationship with Ashley Benson, wore a pink feathered dress as she recited several verses from Colette’s writings about cats. Behind her, images of Lagerfeld’s pet cat Burmese Choupette was shown on the screen to the whole audience.

Actress Helen Mirren, who was good friends with Lagerfeld, paid tribute with excerpts from “The World According to Karl,” a book of quotes that he published in 2018. The commemoration was done with musical assistance from violinist Charlie Siem.

The houses of Chanel, Fendi and Karl Lagerfeld organized the event. Throughout the night, images of the late designer appeared on the big screen, many shot by photographer Annie Leibovitz, according to WWD.

Tilda Swinton joined the memorial, dressed in tweed peplum jacket and bloomers as she read a line from Virginia Woolf’s “Orlando,” another one of Lagerfeld’s favorites.

“Clothes wear us and not we them,” she told the crowd, according to WWD. “They change our view of the world, and the world’s view of us.”

Pharrell Williams paid his respects to Lagerfeld as well and joined many of the fashion stars onstage to honor him as they all held hands in a line and performed for the crowd.

Ahead of his death, Lagerfeld was very clear in how he would like to be honored. He wished to have his ashes mixed with his mother’s and his late partner, Jacques de Bascher’s and did not want to have a funeral ceremony.

His brand announced that they would respect his wishes, and the week he died, friends and fashion industry insiders paid their respects at his cremation in France. Editors Wintour, 69, and Carine Roitfeld were on hand as well has Monaco’s Princess Caroline.

Lagerfeld’s final Chanel show took place in March, which Delevingne, as well as a number of other famous faces, walked the runway in celebration of the last show.

The event was also held at the Grand Palais, featuring a transformative set decorated as a glamorous winter ski wonderland and filled with touching tributes.

A note with a sketch that Lagerfeld drew of himself and Chanel founder, Coco Chanel, with the words, “The beat goes on…” was placed on each attendees’ seat. And a minute of silence was observed before the show began.

Many famous faces came out to celebrate and honor Lagerfeld, including Penelope Cruz, Janelle Monae, Kristen Stewart and Naomi Campbell.

During the finale, models walked the runway together noticeably moved and crying during their final walk to the song, “Heroes” by David Bowie. 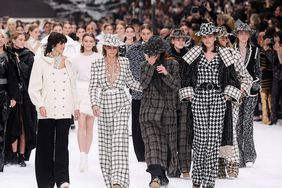 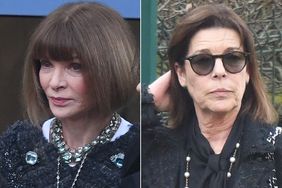