Last night was the first half of the big Project Runway finale. All four designers -- Uli, Laura, Michael and Jeffrey -- were seen readying their collections for Olympus Fashion Week. Tim Gunn paid a visit to each contestant at their homes, to meet their families, hear about their inspirations, and offer a few pointers. They reunited a few weeks later in New York. After picking models and deciding on their looks, a scandal began to brew: Laura became convinced that Jeffrey had help sewing his finely crafted pieces. Bringing the other designers and Tim into her theory, she succeeded...

Last night was the first half of the big Project Runway finale. All four designers — Uli, Laura, Michael and Jeffrey — were seen readying their collections for Olympus Fashion Week. Tim Gunn paid a visit to each contestant at their homes, to meet their families, hear about their inspirations, and offer a few pointers. They reunited a few weeks later in New York. After picking models and deciding on their looks, a scandal began to brew: Laura became convinced that Jeffrey had help sewing his finely crafted pieces. Bringing the other designers and Tim into her theory, she succeeded in raising serious doubts about Jeffrey’s work. What will happen next week? Is Jeffrey guilty? Will he get kicked off? Who do you think is going to be crowned star designer of the Runway! Tell us! Click through to the next page to read more and leave a comment.

To see more of our takes on Project Runway, click here.

I wish this episode was dragged out into two! I so wanted to spend more time snooping around the designers’ homes. I love seeing their childhood photos — Michael’s ‘fro, Jeffrey’s 80’s blonde phase. Who knew that Uli was from East Berlin? Can you believe how huge and swank Laura’s Manhattan loft is? Who lives like that here? Jeffrey’s little boy is the cutest thing ever, but lets hope that neither him nor girlfriend Melody get near him with a pair of hair clippers. And, I want to know what Michael cooked for Tim!

Ok, pushing aside my voyeuristic desires. I don’t think Jeffrey is going to get kicked out. I think he’s gonna win.

I totally agree! I wanna see more of their homes! And I wish the cameras had followed them while they were working on the collections themselves- it would have given an interesting perspective on the collections (and maybe shed some light on this Jeffrey scandal). I have very strong feelings about this controversy- think about the Jetsetter challenge. Jeffrey finished 3 pieces (pants, blazer, and shirt) before Laura finished her one dress– and then he won. I think if you have made clothing professionally, you do have a different level of craft than if you have just sewn for yourself at home (I say that as a home sewer with pro designer friends who sew circles around me). They better let him in to the final- I want that dress with the zippers! That was amazing. And oh, oh. Michael. What is that lacing at the neck? I fear he is not playing to his strong suit- where’s the chic sportswear? I want it to be next Wednesday right now!!

I, too, would’ve loved watching the process of them creating their collections — it would’ve been fun to see the interaction with their families too (like Laura sewing as her five kids go running around her and turtle poop goes flyng by). I had total apartment envy looking at Laura’s loft and what about Uli’s view?? No wonder she’s constantly thinking of light, breezy clothes. Now getting to the Jeffrey scandal — though he’s angered me for most of the season I think the outcome will be that he didn’t get outside help. That’s what my gut tells me. I just don’t think that’ll be the verdict (though watching it unravel will be plenty interesting). As for the various collections so far — yikes about Michael’s. Those gold lame pockets were scary. Though I’ve seen them in their entirety on the runway I’ll keep my mouth shut. I’m just excited to see how it all unfolds next week.

I think Laura is really stirring up trouble here. I actually have grown fond of Jeffrey (how cute is his son!!!) and think that he is one of the only designers who actually plays up his strong points. Michael, hello, what are you doing?! Personally, I think Laura is just jealous of how quickly and efficient Jeffrey works. Looking back, he was always one of the first ones done and none of his clothes had to be glued together at the last minute. Maybe if Laura wasn’t too busy sewing every little bead on every single outfit she would be able to finish quicker. Frankly, I’m so over her work anyway. I agree I would have wanted to see more of their homes and lives outside of the show. It just felt like not enough time. I can’t wait for next week! My fingers are crossed that Jeffrey isn’t going anywhere.

I’m going to skip over the obvious scandal (i.e., did Jeffrey or didn’t he? Is he the Keith Michael of outsourcing sewing?) to focus on, what I think, is the greatest scandal: those gold sequined pockets that Michael was working on. What happened? Before I saw that episode, Michael was, without a doubt, the designer I had the most faith in. But that sheer — and dare I say, tacky — white top with the gold pockets? Well, let’s just say that I hope he takes Tim Gunn’s immortal words to heart and will “Make It Work.” Right now, it looks like a leftover from a 2002 J. Lo video! All that’s missing is Ja Rule dancing around the mannequin. Seriously, Michael, you are better than that.

That’s a great point, Melissa. Jeffrey did finish three pieces in the time it took Laura to finish one (kind of simple) dress. Plus, those pieces were fairly elaborate. She’s probably just mad because Tim Gunn loved Jeffrey’s work.

Oh, the manufactured drama. Everyone knows Jeffrey shows at a fashion week. Perhaps the producers make him take the leather jeans out of the collection. He’s clearly going to win. Not that I necessarily want him to. But if we’re polling, I think he will. And if we’re polling about whether we think he cheated, yes, I think a few Cosa Nostra employee hands offered to help out, and it was an offer he couldn’t refuse.

Michael caught something from Kayne — some serious mis-use of sequins. I worry about him, as he appears to be the nicest of the lot. Though was sort of moved by Uli’s East Germany escape-to-Miami story. Laura, love your style, but as someone who barely has enough room to raise one kid in Manhattan, I’m not buying your pleas of “I need money to start my line!” Sorry, Red, but anyone with a NYC loft big enough for six kids, two adults and a turtle has got some serious bucks. Tell Einstein to loosen the purse strings a little.

Can’t wait til next week. But what then? Top Chef?? 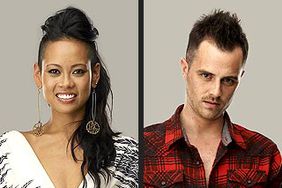 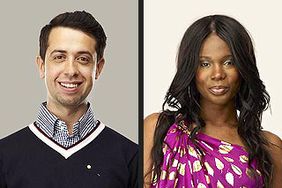 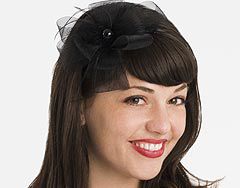