Thinking Inside the Box! Beyoncé and Jay Z Dress as Barbie and Ken with Blue Ivy For Halloween

Talk about thinking inside the box for Halloween outfits!

Beyoncé and Jay Z took their Halloween costumes to a whole new level on Monday night when the “Halo” singer showed off the Barbie and Ken costumes she and her husband wore.

While Blue Ivy Carter‘s back was to the camera, the position still showed off her dazzling pink skirt and a custom painted “Barbie” Moto jacket by Jeantrix, completed with black fishnet stockings and light up POP Shoes.

Beyoncé looked insanely impressive in a striped black and white bodysuit, Sunday Somewhere sunglasses, a high ponytail, red lipstick and a pink box to encase her, with the words “Black Barbie” written in white near the bottom.

Jay Z, 46, complemented his wife’s costume in a black tuxedo with a silver bowtie, a sparkly silver cummerbund and a black bouffant wig.

The “Empire State of Mind” rapper was also encased in his own box, with the words “Black Collector Edition” on top, while “40th Anniversary Ken” was written on the bottom.

It was quite the change from the earlier looks the Carter ladies showed off as a members of the 1980s hip hop trio Salt-n-Pepa, with Tina Knowles rounding out the cast. 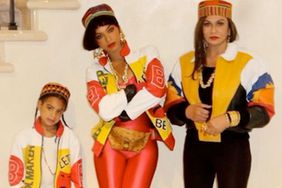 The '80s Are Back! Beyoncé and Blue Ivy Dress Up as Salt-N-Pepa for Halloween 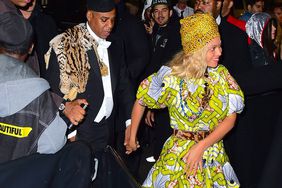