A 37-year-old man was arrested outside of Bella Hadid‘s New York City home after he was allegedly seen standing near her apartment building on Thursday.

The supermodel, 21, called the New York City Police Department to report a man had been stalking and harassing her between December 17, 2017, and Feb. 7, an NYPD spokesperson tells PEOPLE.

Ryan S. Perez was arrested Thursday at around 9:35 p.m. after Hadid told police he had left “numerous unwanted threatening messages” to her through social media, the spokesperson said.

Perez was charged with aggravated harassment and stalking. The investigation is ongoing, and it is unclear if he is still in custody, the spokesperson tells PEOPLE.

The model did not let the incident stop her from enjoying her night, as she later headed to friend Samuel Krost’s birthday dinner, which Bella shared video of on her Instagram stories.

There she was joined by sister Gigi, who had just closed Jeremy Scott’s New York Fashion Week show.

Hadid recently landed her first dual cover alongside Gigi for the March issue of British Vogue.

The duos mother, Yolanda Hadid, was spotted by paparazzi in Beverly Hills and asked how she felt about the covers, to which she told a TMZ photographer, “I love it. Love the skin you’re in, baby!”

While Hadid has grown comfortable in her own skin, earlier in January she revealed that she used to get so nervous before interviews that she would “start crying and shaking.”

“My sister [Gigi Hadid] is very bubbly and very out there, and I was always very reserved. I would literally start crying and shaking if I had to do interviews at red carpet events. It was really nerve-racking and it’s scary, and it’s not only you,” she said during an episode of her mother’s Lifetime series Making a Model with Yolanda Hadid.

“It gets a lot better once you have to talk to people every day,” she added while giving advice to an aspiring model who struggled with nerves. “Then you’re like, ‘Okay, I guess it’s my job, I have to do it!'” 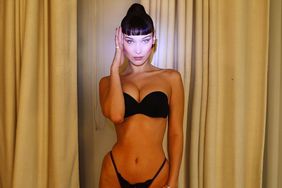