Leaving the Hollywood Hills – and roommate drama – behind, the reality star makes her big-screen debut in a barely-there green bikini on the Hawaii set of her new movie.

The High School Musical 3 costars – and real-life couple! – snuggle on the beaches of Turks and Caicos.

The Oscar winner is a perfect beach babe in her string bikini while boogie boarding in Malibu.

He may be celebrating his 40th birthday at Bronte Beach in Sydney, but the X-Men star’s buff torso is totally ageless.

The couple take a coordinated beach break, wading into the waters of Los Cabos, Mexico, in halter bikinis and sunglasses.

The 39-year-old star shows off her agelessly perfect body in a mix-n-match string bikini while relaxing and snacking on the beach in Cabo.

The actress channels her Blue Crush surfer girl as she takes a walk on the beaches of Malibu in a teeny printed bikini and David Yurman bracelet.

Wow! The new mom shows off her flawless figure in a L*Space bikini as she vacations with her husband and pals in Mexico.

The star mixes and matches her printed keyhole bikini top with her orange floral sarong – topped off with her $5 million wedding ring! – as she heads to the beach in Miami.

Hot mama alert! The new mom shows off her fit body-after-baby in a red-hot one-piece while on vacation with her family in Hawaii.

It’s a family affair! Showing off her Texas roots in a straw cowboy hat, the new country singer joins the rest of the Simpson clan for a boating trip on Lake Tahoe.

The Heroes star enjoys a refreshing dip with her pooches and fiancé (not pictured) in a skimpy black string bikini on a Malibu beach.

The Hills star may be keeping mum about their romance, but it’s hard to deny their beachside stroll in Malibu – or how cute Conrad’s printed cover-up is!

The newly single star spends quality time with pals on the beaches of Malibu.

The singer takes beau Chris Brown (not pictured) home for a weekend of fun in Barbados, but keeps her edgy style intact in her boldly-printed bikini and stacks of bangles.

The Project Runway host makes it work in her skimpy black bikini as she cruises off to Italy with her family.

The actor takes to the California beach with a furry pal in floral trunks and coordinating towel.

Proving she’s an ultimate beach babe, the reality star comes up with a grin in her Le Doux bikini in Cabo San Lucas.

What cellulite? The actress shows off her lean and toned body in the Venice Beach surf while enjoying an afternoon with her boyfriend Taylor Locke (not pictured).

The newly single actress hits the beach with some furry friends in a barely-there black string bikini that flaunts her perfect figure.

The actor and soon-to-be-dad kicks back with pals in his familiar summer uniform of shorts – and nothing else!

Staying hydrated with a frozen drink and bottled water, the actress strolls on the beach in a bright pink bikini, white hat and Juicy Couture tote while vacationing in Mexico with husband Josh Kelley (not pictured).

The Israeli model – and off-and-on girlfriend of Leonardo DiCaprio – soaks up the sun and surf in Saint-Tropez in her teeny hot pink bikini.

The father-son duo hits the waves in Malibu in coordinating trunks and grins.

You may not see her as the voice of Gossip Girl, but you can’t miss the star in her colorful patterned bandeau bikini as she walks into the waves in Hawaii.

Enjoying her time away from the spotlight, the pop star, who was in Costa Rica with Mel Gibson, hits the South American waves modeling Ed Hardy’s latest swimwear styles.

The couple plays it coy – with matching towels! – for a day on a Malibu beach with their dogs.

Relaying her star status, the actress sports a celestial print Victoria’s Secret bikini while on vacation in Hawaii with her hockey player boyfriend.

The Hills resident hottie catches some waves with his on-again girlfriend on a family vacation in Hawaii.

The buff Brit takes to the beach in Los Angeles in a sexy white bikini that coordinates with her canine companion. 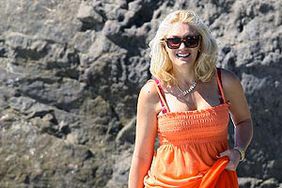 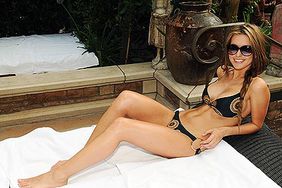 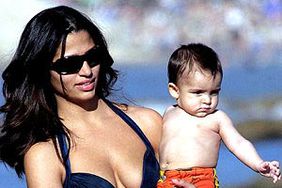 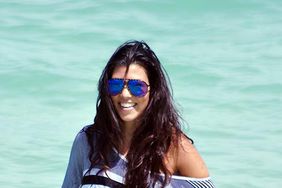 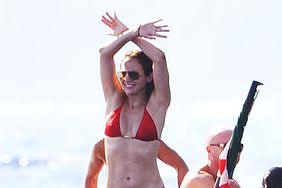 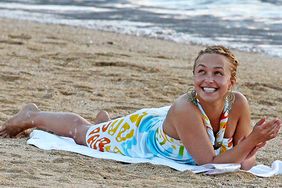 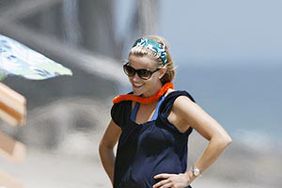