In the candid cover story, Aweng Ade-Chuol opened up about her suicide attempt, mental health and criticism she received from the South Sudan community after marrying a woman

After receiving backlash for coming out as lesbian, South Sudanese supermodel Aweng Ade-Chuol is embracing her sexuality on the January 2021 cover of ELLE UK.

The former refugee, 21, was photographed passionately kissing wife Alexus Ade-Chuol (whom she married at New York City Hall in July) for the striking cover and poses topless with the nail artist entrepreneur inside the issue. The couple donned matching black-and-white polka dot looks, head-to-toe leather ensembles and straight-leg denim for the shoot.

In the cover story, Aweng opened up about her suicide attempt, mental health and criticism she received from the South Sudan community after getting married.

"That is really baffling to me, and I’m still processing it," she told ELLE UK of the backlash. "We got married and the whole world, literally the whole of my community, were wishing that I passed, in a way... A few months later, I attempted [suicide]. It was really absurd, because subconsciously I felt I was maybe drained by the fact we’d got married. It’s still a discussion now, like, 'How dare she marry a woman?'"

The supermodel (who is signed to IMG) continued: “You can’t control what people say, and there were tabloids and newspapers back in Sudan... It was a whole thing. For me, it was like, with the political climate that’s going on, you really think that my marriage is the most significant thing in your life right now? It was saddening, because it was the happiest day of my life, and they couldn’t let me enjoy it."

Aweng also got candid about the impact of COVID-19 and being in lockdown, explaining that the events of the last few months gave her a "reality check" about the importance of mental health.

"I’ve always been outspoken, and mental health has always been something that I’ve spoken on. But I guess I didn’t experience the other side of it until this year, when lockdown impacted my life directly, actually [put my] life at risk. When that happened, it was a reality check. Before, it was like, mental health is important, but now, it is the most important thing. Where you’re at mentally is the most important foundation."

"I’ve really learnt a lot about myself this year. I’ve learnt my worst sides, my best sides, my greatest sides... As soon as I discovered how far I can go with all three, it was about self-control: learn how to be within yourself and comfortable enough to control how far you take things," she shared.

Aweng first opened up about her suicide attempt on social media earlier this year. "‘I attempted suicide two months ago today," she captioned an Instagram post in June. "And I just want to say, that I’m in a much better place. And no one had to know that – but it’s good to get it out of my chest. I feel well enough to. Especially today. I am thankful for life."

Speaking to ELLE UK about what happened after she chose to go public with her very private struggle, Aweng said, "Young kids came up and said, 'I’ve been thinking about it... And I’m like, OK, OK now.' I can’t respond to everybody. I had to put a general announcement out to say, “Hey guys, I’ve announced what happened to me, I guess things could be happening in your life, too, but I’m still learning. I need to maneuver around this thing I went through, so I don’t know how to help you but here’s some suggestions: therapy and self-acceptance.'" 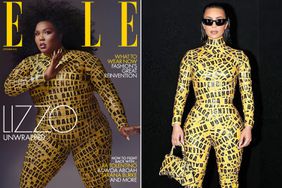