Ariana Grande is already serving looks ahead of her debut as a coach on The Voice.

On Wednesday, the 27-year-old singer-songwriter shared a few of her style "outtakes" from the show on Instagram. In a number of the images, she wore a black flower-shaped crop top and mini skirt, topping it off with a pair of thigh-high boots.

Grande also showed off a second look, which consisted of a pink-patterned bralette and matching pants. In one chic selfie, she posed in front of a mirror, pairing the outfit with a brown suede jacket. To compliment both looks, Grande had her hair styled in her signature sleek ponytail.

"outtakes @alfredoflores @nbcthevoice," she wrote in the caption, giving a shout out to photographer Alfredo Flores as well as the reality competition series, which will return this fall.

Ariana Grande to Replace Nick Jonas as a Coach on The Voice for Season 21: 'I Am Beyond Thrilled'

In March, the "7 Rings" singer announced that she would be replacing Nick Jonas, 28, for season 21 of the singing competition series.

"surprise !!! i am beyond thrilled, honored, excited to be joining [Kelly Clarkson, John Legend and Blake Shelton] next season ~ season 21 of @nbcthevoice!" Grande tweeted. "[Nick Jonas,] we will miss you."

Last month, ahead of Grande's debut, Jonas offered her a few words of advice while appearing on The Kelly Clarkson Show.

"I mean, Ariana — as we all know — is one of the best singers in the game and she's gonna be an incredible coach. I think the only advice I would give is just not to trust any one of you," Jonas joked, referring to his fellow coaches on the show.

Along with Grande's preparations for the show, she's also been pretty busy in her personal life as well. Last month, the "thank u, next" singer tied the knot with Dalton Gomez, 25-year-old real estate agent.

"They got married," Grande's rep confirmed to PEOPLE exclusively. "It was tiny and intimate — less than 20 people. The room was so happy and full of love. The couple and both families couldn't be happier." 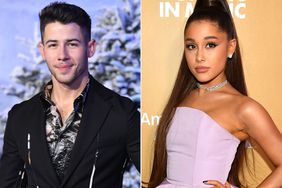