Anne Hathaway, Gwyneth Paltrow and More Turn Out For Valentino

Anne Hathaway may have already made an appearance at the N.Y.C. premiere of Valentino: The Last Emperor, but last night she got a second look, joining stars like Gwyneth Paltrow, Joan Collins, Rachel Zoe and Nicky Hilton at the documentary’s West Coast premiere in L.A. For the man of honor, the question of letting filmmakers document his life was a tough but ultimately satisfying choice. “Of course it was difficult,” he told PEOPLE.com. “But finally it is so beautiful and so good that now I accept it and it is okay.” Hathaway, who entered the screening theatre through a side entrance hand-in-hand with boyfriend Adam Shulman, said that she wishes that the recently retired designer would step back into the world of fashion. “I’m going to beg him to come back,” she told PEOPLE.com. “I actually begged him to make me an Oscar dress, but that didn’t happen and I got to wear the most gorgeous Armani — but I think now that he has retired we all appreciate him that much more.” And the rest of the Hollywood seemed to agree, as the audience stood when the design legend entered the theatre, and then again at the end of the film. 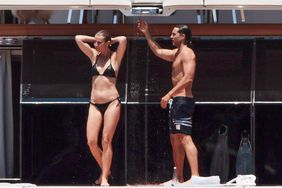 Gwyneth Paltrow Vacations with Valentino Garavani - Could They Be Wedding Dress Planning?