Angela Kinsey is branching out from her role as The Office‘s stern cat-lover Angela Martin and getting sassy in a series of spirited spots with hair color brand Nice ‘n Easy. Starring as a “Guardian Girlfriend,” Angela tells it like it is in a commercial and print ad campaign, advising women about their hair dos — and don’ts. “I’m thrilled to be working with Clairol Nice ‘n Easy,” Angela tells PEOPLE.com. “It has been a blast stepping into the role of the Guardian Girlfriend ‘GiGi’. She gives straight-shooting advice to women looking to get the right color.” The ads have just launched in limited release on cable TV and will hit the networks in July. Tell us: What do you think of Angela’s colorful new role? 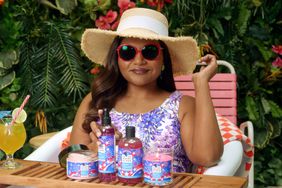