Before Amy Adams was nominated for an Oscar, the redheaded actress could be found folding shirts at the local Gap. In a candid interview in the May issue of W, the Doubt star dishes about life before becoming famous and the changes that stardom brings. And while she has since worked with everyone from Meryl Streep to Leonardo DiCarprio, Kirstie Alley, Tom Hanks and Julia Roberts, landing the Gap job at age 18 was a dream come true. “[It was] a huge deal, because with the 40-percent-off discount I could finally buy things that weren’t on sale!” the star tells W. And for a girl in high school, that meant a lot. “We were defined by the clothes we bought at the mall,” she says. And while Amy now has her pick of labels like Oscar de la Renta and Carolina Herrera, her teenage years were more about making do. “I would make fake Guess jeans by buying a cheaper brand with a triangle label and then cutting it off so you could still see the triangle outline. It’s so sad that I did that! But I really wanted to be one of those girls,” Amy recalls about trying to keep up with the cool crowd. Check out more from Amy’s interview with W at wmagazine.com or pick up the magazine when it hits stands April 21. 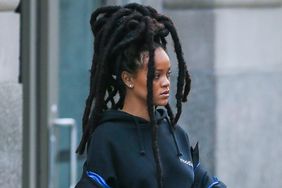