Aly Raisman Is 'Proud' of Her Aerie Underwear Ads: 'I'm In Control, I Can Do Whatever I Want'

Aly Raisman is a force to be reckoned with. The 23-year-old gymnast became an American hero after earning three gold medals in the Olympic Games and now she is becoming an unstoppable force in female empowerment by using her voice to stand up against former gymnastics doctor Larry Nassar. Her powerful statement was one of the many victim impact statements delivered this week to sentence the abuser to a lifetime in jail after being accused of sexually abusing many young girls.

Raisman isn’t ready to slow down, and since people are only just starting to listen, the gymnast is continuing to make an impact by using her voice to advocate for body positivity. Raisman joins actress Yara Shahidi, singer-songwriter Rachel Platten, and body positivity activist Iskra Lawerence for the #AerieREAL Role Model campaign, which features unretouched images of the four women modeling the new spring collection.

Raisman said that being a part of the campaign was a “dream come true,” explaining to PEOPLE that the current climate definitely played a factor in how she felt about representing Aerie’s message. “Especially with everything going on right now with my own experience, my teammates’ experience, the many, many survivors of Larry Nassar, the #MeToo movement; so many people are suffering silence and don’t feel like they have a voice,” Raisman told PEOPLE at the Aerie Real Role Models Campaign Launch event in New York on Thursday. “It’s so important to teach people that women don’t have to be modest to be respected and it’s our bodies and we can do whatever we want with [them].”

Posing in her underwear without fear of judgment provided Raisman an undeniable sense of power. “I’m so proud to be in this campaign and to be able to pose in bra and underwear and in swimwear because I want to and I’m in control—I can do whatever I want,” she told PEOPLE.

The Olympic gold medalist expressed that this respect for women’s control over their own bodies shouldn’t be limited to ad campaigns and that it must transpire in society. “I think it’s important to teach everyone that messaging and to teach these young kids that are growing up to understand that you always have to respect each other,” Raisman said. “It doesn’t matter what a woman is wearing, [behaving like] a beast is never okay.”

Raisman understands that sometimes loving yourself is easier said than done. “We have to stop comparing ourselves to each other. I’m guilty of it too; I think everybody does it,” she told PEOPLE.

Actress and activist Yara Shahidi also joins Raisman in the new Aerie campaign and expressed that although she’s honored to be considered a role model, she understands the responsibility that comes with it. “It’s pretty cool I’m considered a role model in any aspect of the term, so it’s not something that I take lightly,” she told PEOPLE.

The 17-year-old actress appreciates that Aerie is breaking barriers to create campaigns with messages that reflect the values of real women. “I just love the fact that I get to work with a brand whose message I appreciate and whose clothes I wear and who is really intentionally making campaigns,” she said. “We’re not fitting into what their campaign is supposed to be but they’re fitting a platform to us.”

Since Aerie first introduced un-retouched, body positive images four years ago with British-born model Iskra Lawrence, the brand has continued to grow its Real Role Model family to include outspoken, awesome women including Shahidi, Raisman and Rachel Platten. Are you inspired by these women? 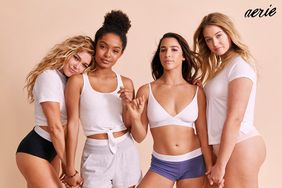 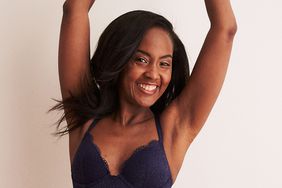 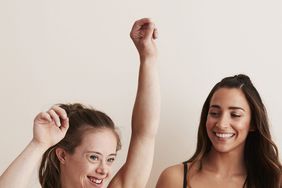