Thanks to intimate interviews with Alexander McQueen's friends and family, new insight into the late designer's life is revealed in the documentary, McQueen

Eight years since the tragic death of legendary designer Alexander McQueen, a new documentary, McQueen, is providing an intimate look inside the life and mind of the creative genius.

Known for his couture-like creations set against controversial, often morbid fashion shows, the new film (out today in N.Y.C. and L.A.) explores the British designer’s psyche through candid interviews with friends and family. His inner circle takes viewers on his journey from an East End teenager with no formal training to the man who built his own successful brand and who ultimately took his own life on February 11, 2010.

From funny anecdotes from his ex-boyfriends, to long lost footage of McQueen messing around in the studio, the film shows a candid look at the multifaceted designer’s life. Some moments were so revelatory, we’re giving an inside look below.

His first collections were financed through unemployment checks.

Despite getting a ton of press and attention for his boundary pushing shows — which began right away after his graduate collection from London’s Central Saint Martins titled “Jack the Ripper Stalks His Victims” gained recognition — he began his own label thanks to unemployment checks. He fashioned dresses from Saran Wrap and would color fabrics with spray paint and mark it up with tire tracks. And at the end of shows he deliberately hid his face for fear the unemployment agency would catch on.

But even with all the acclaim and praise he’d receive, his ex-boyfriend recounts celebrating after the shows at McDonald’s, because that was the only place they could afford.

McQueen suffered abuse as a child.

The film examines the abuse he and his sister Janet McQueen suffered from Janet’s ex-husband. While some fashion critics have accused his collections of having undertones of violence against women (like his 1995 “Highland Rape” show) he claimed he drew upon his past experience to create garments that gave women strength and power.

“I don’t want to do shows that you walk out of feeling like you just had Sunday lunch,” he says in the film. “I want you to come out feeling either repulsed or exhilarated. As long as it’s an emotion. If you leave without emotion, than I’m not doing my job properly.”

He contemplated suicide at his last fashion show in October 2009.

His friend and former assistant designer Sebastian Pons opened up about the demons that haunted his old friend and how he believed the fashion industry was against him. In the film, Pons explains that McQueen wanted to be elevated from a box underneath the stage to end his life at the end of his final show in Paris.

On October 6th, 2009, four months before his death, McQueen put on his SS10 Plato’s Atlantis show, and it would become one of his most revered.

Friend and fan Lady Gaga also surprised everyone with a music debut at the show, dropping her now iconic hit single “Bad Romance.”

The more successful he became, the more unhappy he was.

By the age of 27 he won British Fashion Awards’ Designer of the Year and was named designer of the couture label Givenchy, but friends said managing two labels in London and in Paris took a major toll on the designer. He dealt with the pressures by turning to drugs and turned to the “evil side” of fashion when he altered his appearance through liposuction.

Friends and family shared home footage of McQueen in his early days, from goofing around in the studio to hanging with his dogs and practicing falconry with his friend Isabella Blow.

The directors, Ian Bonhôte and Peter Ettedgui wanted McQueen to be able to speak for himself as much as possible, so they investigated every archive possible to obtain every single interview of McQueen. The result lets the viewer inside his mind and allows them to better understand the inspiration behind his most influential collections. 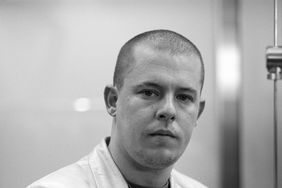 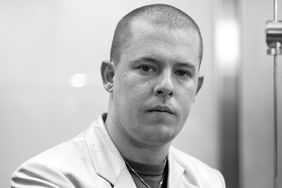 Get an Exclusive First Look at the New Alexander McQueen Documentary