7 Hot Shots of David Beckham in His Underwear

The soccer star has stripped down again – this time to promote his new H&M underwear line. Hmm maybe he'll quit his day job to take up half-naked modeling full time!

first ad for Emporio Armani Underwear debuts in 2007 and features the athlete seductively posed on a messy bed. “He represents a notion of modern masculinity: as a sports hero, husband and father,” designer Giorgio Armani said. “He is also a man with a great sense of style.”

Sit-ups do a body good! Becks’ second campaign takes him to the beaches of Malibu, where he flexes – and flexes some more. “I still feel quite shy when I see a poster or campaign like that,” he said at the time, “but after a while you get used to it – although my mum still hasn’t.”

A second image from the star’s beachside shoot is turned into a larger-than-life billboard at Macy’s Union Square in San Francisco. “I’m always surprised by the amount of attention certain things create,” he blogged, “but the attention this campaign has created is pretty incredible.”

It’s twice the muscles! Beckham bares all in the bedroom for his 2009 Armani campaign, which is mirrored by wife in a similar pictorial.

Care for some company, Becks? Though he’s taken his top (and bottoms) off many times, the father of four still admits to battling nerves during shoots. “It was a daunting experience stripping off in front of a room of people,” he said.

MAN ON A WIRE

In 2009, Beckham picks up a cool costar: wife Victoria. The toothsome twosome strike a few poses together before sitting for separate shots.

And here we go again! The athlete turns designer with a line of men’s bodywear for H&M, and does the tough work himself, modeling the skimpy looks. He delivers good news, too, promising more gear (and more steamy ads!) seasonally.

Mark, David, Kellan: Who's Sexiest in His Skivvies? 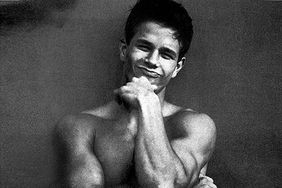 Stars in Skivvies: The Sexiest Underwear Ads Ever

Rafael Nadal Is the New Face of Tommy Hilfiger. To Celebrate, Let's Look Back at Other Hot Athletes With Major Ad Campaigns 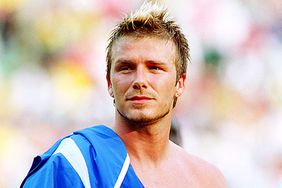