From Lady Gaga's most egg-cellent adventure to Nicki's safari soufflé, see the artists in their fiercest hour!

The daring rapper (nominated for best rap performance by a duo or group Grammy) takes a second to think about her “fierceosity meets fabulosity ” Givenchy ensemble before the show.

Can she hatch an entrance or what? In her egg-cellent incubator, the saves her energy on the red carpet for her Grammys performance at the Staples Center in Los Angeles.

They can’t keep their eyes off each other! (who won best female country vocal performance) and fiancé Blake Shelton are all aglow before the show.

She’s got pull! A ravishing (wearing Jean Paul Gaultier) provides a little spousal support to at the Grammys, where he won best male country vocal performance.

She’s a golden girl! turns it out in J. Mendel at the Grammys, where rumored boyfriend lost out on two awards.

With two Grammy nods, a dapper D&G-clad gets color-coordinated with best dance recording winner , who shows off why she’s a sheer genius on the red carpet in attention-getting Jean Paul Gaultier.

She’s got a leg up on the style competition! The R&B songbird seals her sexy Emilio Pucci frock – check out that daring slit! – with a sweet kiss on the red carpet.

It’s a bird, it’s a plane, it’s , who takes flight in a custom Giorgio Armani gown, as she earns her wings – and a smooch from hubby Russell Brand! – at the Grammys, where she gave an extra-personal performance. 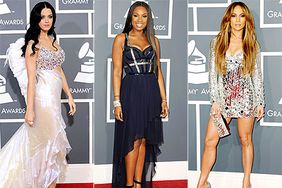 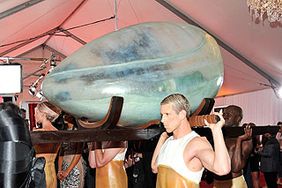