From football rivalries to tattoo mix-ups, see how Christina Aguilera, Lea Michele and more had fun on Hollywood's big night

Va-va-voom! Burlesque’s gets hearts racing while walking the Golden Globes red carpet in a sexy beaded gown by Zuhair Murad. Upon learning was also wearing the same designer, Aguilera quipped that her fellow singer had excellent taste.

The Town’s Jeremy Renner – who just hit the big 4-0 – flexes his muscles and his funny bone on the Globes red carpet Sunday night.

Why the long…hair? According to best supporting actor winner Christian Bale, it’s because of “unemployment. I haven’t worked since The Fighter,” he told reporters of his shaggy do.

Hear that? Sadly for Menounos, the night’s big win goes to New York Jets fan Michael Douglas (with wife ), whose beloved team beat the Patriots, 28-21, shortly before the Globes kicked off.

Look who’s in focus? Glee’s adorable newbie Darren Criss has every reason to see the crowd through rose-colored glasses – his show won best TV comedy series – as he arrives at the Globes.

Funny guys Jimmy Fallon and How I Met Your Mother’s Jason Segel pair up for an impromptu duet of Meatloaf’s “I’d Do Anything for Love” while making their way into the venue. “We just kind of fell in love on the way over in the limousine,” Fallon told of their friendship.

may have mistaken her wrist tattoo for a “club stamp” (oops!), but nominee is still Glee-ful about her golden moment.

Vegetarian (and House star) Olivia Wilde joked she could fit a cheeseburger under her dress, but what’s she really hiding? Some killer gold Christian Louboutin heels! 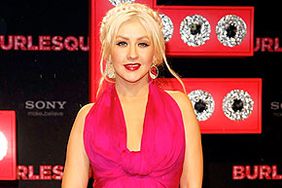 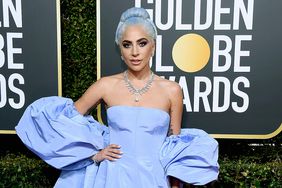