On Monday, the 26-year-old Olympic diver and his Oscar-winning screenwriter husband, 46, marked eight years together with sweet social media tributes to one another.

Posting a carousel of photos of the two on Instagram, Daley began the caption of his post, "8 years ago we met at a dinner, we lived on opposite sides of the pond and thought it was going to be impossible to make it work ... but we did!"

Sharing his own array of pictures on Instagram, Black also wrote a sweet message for his husband. "8 YEARS of adventures, blurry naps, endless nights, sore faces from smiling, laughing, exhaustion from night feeds, baby tears. A family," he said. "Thank you for every minute of it, my warrior monkey prince. 🐸❤️🐵."

Daley and Black first made their relationship public after the former revealed that he was in a relationship with a man in a YouTube video in December 2013.

"Come spring this year, my life changed massively when I met someone and it made me feel so happy, so safe … That someone is a guy," Daley said at the time of meeting Black.

The couple announced their engagement in London's The Times in October 2015. "It turns out that we had both asked each other's parents, and we both had rings ready to go," Daley told Out magazine in February 2016.

The pair later tied the knot in May 2017 at Bovey Castle in Daley's native England, about 30 miles away from his hometown of Plymouth, before later honeymooning in Spain.

A year later, Daley and Black welcomed their first child — a son named Robert "Robbie" Ray — via surrogate. The pair announced the arrival of their son in a statement appearing in the Times.

A few months later, the couple opened up in an interview with The Telegraph about their lives as dads to their son and how neither knows which of them is his biological father.

"That's going to continue forever and ever," Daley said at the time of their family members' claims of who Robbie more resembles. "But one thing we're very strongly leaning towards is that we don't want to know. He's ours."

"I don't think we'll ever hide anything from him, in fact I know we won't," Black chimed in. "That's not just our instincts, that's listening to the advice from people born of surrogacy. They say, 'The things that bothered me are the things I wasn't told. The things I was told don't bother me.'" 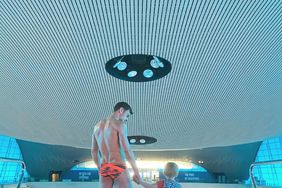