Tom Brady Jokes About Passing Lombardi Trophy During Super Bowl Boat Parade: 'I Was Not Thinking'

"I found out later that — had that been an incomplete pass — that would have went down like 80 feet," the Tampa Bay Buccaneers quarterback said

Tom Brady is looking back on the boat-themed festivities following his Super Bowl win last month.

While appearing virtually as a guest on Tuesday evening's episode of The Late Late Show, the 43-year-old Tampa Bay Buccaneers quarterback opened up about tossing the Lombardi Trophy from one boat to another during a waterway parade that took place on the Hillsborough River in downtown Tampa following the Super Bowl.

After host James Corden showed the video of the heartstopping boat toss, Brady explained, "First of all, I was not thinking at that moment. There was not a thought. It was just, 'This seems like really fun to do!'"

Thankfully, the Lombardi Trophy was caught by Brady's teammate, tight end Cameron Brate, a feat that the football star said that he was "so happy" about.

"I found out later that — had that been an incomplete pass — that would have went down like 80 feet," Brady added with a laugh.

After the Tampa Bay Buccaneers beat the Kansas City Chiefs at Raymond James Stadium to win Super Bowl LV, the Buccaneers celebrated on boats in a waterway parade instead of the traditional winners' parade due to the ongoing COVID-19 pandemic.

There, players including Brady — who was joined by his kids — and Rob Gronkowski rode on various watercrafts around the harbor area, clad in the team's signature bright red and white.

During his time with Corden, 42, the late-night host also shared a video of Brady after he and his teammates concluded the boat parade, where the seven-time Super Bowl champion was seen unable to walk on his own.

When asked by Corden, "Is this sea legs or, dare I say it, a touch of tequila?" Brady replied, "Oh man, well, I think a little of both."

"I will say it was a moment of celebration," he added. "I'm happy to be on land, in that moment, and I'm happy to be surrounded by my fellow quarterback [Ryan Griffin], in the right place at the right time."

"I see my oldest son run over to me, and I gave him a big hug, and I saw my two little ones, and all of the sudden I saw my wife, and I gave her a big hug," Brady recalled. "And just as I did it, she says, 'What more do you have to prove?'"

"And what did you say in that moment?" Corden asked, before Brady replied, "I just gave her a big hug. I was trying to think of a way to change the subject really quick. I think I moved on to something else pretty quickly."

After winning the Super Bowl during his first year with the Tampa Bay team, Brady added that the return to regular life could be compared to stepping off of a treadmill running at its highest speed.

"I'm just getting reacquainted with the dishwasher," Brady joked. "Where the broom is, and where the vacuum is." 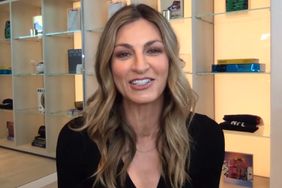 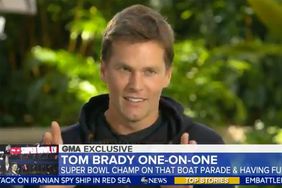 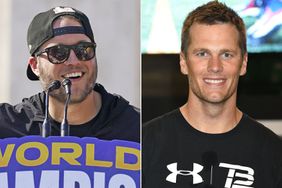