The four-person team already scored a silver medal, with Suni Lee taking gold in the all-around and more events to come

The St. Paul native, 18, is making history in Tokyo as the first Hmong American Olympic gymnast. "It's surreal to say I'm an Olympian now," Lee, who helped the U.S. team win gold at the 2019 world championships, told the Star Tribune. "I've been working toward this for so long."

On July 29, she made history again, winning gold in the women's all-around final.

"I am proud. The family's proud. The community is very proud of her," her father John told Today after the big win. "It's unreal."

She added a bronze to her tally on the uneven bars on Aug. 1.

This is Biles' second Olympics; at the Rio Games in 2016 she took home five medals, and is poised to take more in Tokyo. She's already turning heads in Japan, nailing the Yurchenko Double Pike on vault during a practice session. (ESPN called the move "the greatest Yurchenko double pike we've seen so far from her.") Ahead of the Games, the 24-year-old was honored with her own Twitter emoji — a goat, of course!

On July 27, she shocked fans when she withdrew from the team final, telling reporters she was "just dealing with some things internally which will get fixed out in the next couple of days."

Despite her move, Team USA took home the silver medal, and Biles posted an Instagram celebrating her teammates.

"I'm SO proud of these girls right here. You girls are incredibly brave & talented! I'll forever be inspired by your determination to not give up and to fight through adversity! They stepped up when I couldn't," she wrote. "Thanks for being there for me and having my back! Forever love y'all."

One day later, she announced her withdrawal from the individual all-around competition; she later withdrew from vault, uneven bars and floor, and will make a decision about beam this week.

Making her first appearance on an international stage, Chiles, 20, is another one to watch, and hails from the same training gym as teammate Biles. "I need to be able to go out there and just be Jordan and not try to be ... I don't know, like the next Gabby [Douglas], the next Simone," Chiles told USA Today. "I want to be the next Jordan. I'm myself."

The 19-year-old overcame a January hand injury to earn a spot on the team. According to USA Today, she had "strong performances" on the vault at the June olympic trials, and finished fourth overall behind teammates Biles, Lee and Chiles.

Keep an eye out for the 21-year-old individual competitor on the floor and vault: Carey is a four-time world championship medalist who is competing as an individual for the U.S. "Just being a role model for little kids is a really cool thing that happens," Carey — who in June unveiled a triple-twisting double layout on floor, a skill no female gymnast has ever competed with — told PEOPLE earlier this year.

With Biles out of the individual all-around competition on July 29, Carey stepped in, placing 8th on July 29.

Also competing individually, Skinner, 24, was an alternate on the 2016 Olympic team. She overcame a tough case of COVID-19 to make it to Tokyo — and hasn't taken her spot for granted. "I survived, but I wanted to give up so many times," she said of grappling with the virus in an interview with Today's Hoda Kotb. "I was like, 'I don't even know if I can do this anymore.' But I feel like just having these girls and my family having my back through it all has really helped me to get to where I am today."

On July 25, the 24-year-old gymnast did not qualify for any event final after competing on all four apparatuses during the qualifying round, and finished the all-around in 10th place with a total score of 55.398.

However, when Biles withdrew from several individual competitions, Skinner earned a spot on the vault — and won silver! 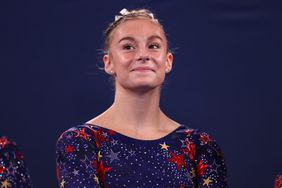 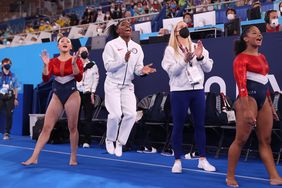