For MyKayla Skinner, her time in Tokyo has come to an end.

On Sunday, the 24-year-old gymnast, who competed as an individual and not as a member of Team USA, did not qualify for any event final after competing on all four apparatuses during the qualifying round and finished the all-around in 10th place with a total score of 55.398.

Skinner, who is a first-time Olympian and the oldest gymnast of the American women, will not be able to compete for a medal on Thursday when the top 24 gymnasts (with the top cumulative individual scores) advance to the individual all-around final, which has a limit of two gymnasts per country.

In addition to completing her run at the Olympics, her elite gymnastics career has effectively concluded. (If there is an unexpected COVID outbreak among Simone Biles, Sunisa Lee, Jordan Chiles or Grace McCallum prior to the team final, Skinner could possibly serve as a replacement.)

"Heart broken 💔 but feeling sooo humbled and blessed for the amazing performance I had tonight! You have all brought me to tears thanks for being my biggest cheerleaders! Love u all😘 xoxo myk," Skinner tweeted on Sunday, adding the hashtag "#NeverGiveUp" in a follow-up tweet.

Biles shared a heartfelt message to Skinner on social media. "So proud of this one," she wrote on Instagram alongside a photo of the pair embracing. "No one understands the hard work and dedication it takes to come back from collegiate gymnastics & make an olympic team. You did the damn thing!"

"Thanks for reminding us that grandma's can do it too!" she jokingly added. "Thanks for keeping gym light-hearted and fun! I love you Ms Olympian."

In response to a similar message from Biles on Twitter, Skinner wrote, "Don't know what I would do without youuuu!!!"

Skinner was not selected to compete in the 2012 Olympic trials. Then in 2016, she was chosen as an alternate for the Rio Games, but did have not an official spot on the team.

On Sunday, the Biles-led team made uncharacteristically sloppy errors during the qualifying round. Biles, Chiles, Lee and McCallum are in second with a score of 170.562. Russia leads with 1.067 points ahead of the Americans.

Biles, who also made the event finals in vault, floor, bars and beam, and who still could win a record five golds, leads on vault with a score of 15.183. Lee earned the second-highest score on bars, at 15.200. (Only the top eight on each apparatus qualify for finals.)

Jade Carey and Skinner competed as individuals and are not part of the women's gymnastics team event, which holds its final on Tuesday. 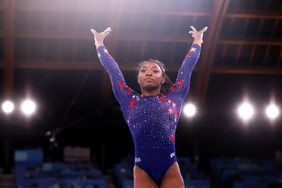 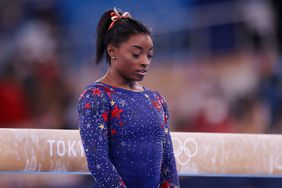