On Feb. 23, Tiger Woods was driving downhill in California when his car struck a sign in the center divider, sheared through a tree and landed in the brush alongside the road with major damage

Tiger Woods has shared the first photo of himself amid recovery following his single-vehicle rollover car crash in California.

On Friday, which marked eight weeks since his Feb. 23 incident, Woods, 45, posted an image of himself and his dog Taz. In the photo, Woods is smiling as he stands on crutches with his right leg in a walking boot.

"My course is coming along faster than I am 😃. But it's nice to have a faithful rehab partner, man's best friend," the golf icon captioned the picture starring his border collie.

On Feb. 23, Woods was traveling downhill on the border of Rolling Hills Estates and Rancho Palos Verdes in California when his car struck a sign in the center divider, sheared through a tree and landed in the brush alongside the road with major damage, according to the Los Angeles County Sheriff's Department (LASD).

Woods "suffered significant orthopedic injuries to his right lower extremity that were treated during emergency surgery by Orthopedic trauma specialists at Harbor-UCLA Medical Center," according to Anish Mahajan, MD, chief medical officer at Harbor-UCLA Medical Center, who released a statement on the athlete's Twitter page the day after the crash.

More specifically, Mahajan said Woods suffered "comminuted open fractures," which means his tibia and fibula bones, the two main bones in the leg, had shattered and broken through the skin, requiring immediate surgery, along with smaller injuries to the ankle and foot.

Following his accident and emergency surgery for "significant orthopedic injuries to his right lower extremity" in the wake of the crash, Woods returned home to Jupiter, Florida, where he has been focusing on his rehab and spending time with his son Charlie and daughter Sam.

"I will continue to focus on my recovery and family," Woods said in an April 7 statement shared on Twitter.

In March, Los Angeles County Sheriff Alex Villanueva said the cause of Woods' accident "has been determined, the investigation has concluded," however, they are unable to release the information to the public at the request of the golfer's team.

"We have reached out to Tiger Woods and his personnel. … There's some privacy issues on releasing information on the investigation so we're going to ask them if they waive the privacy and then we will be able to do a full release on all the information regarding the accident," Villanueva said, adding, "We can't release it without the people involved in the collision."

Earlier this month, a source told PEOPLE that "Tiger is happy to be back home" and "is focused on his continued recovery. There is a rehabilitation plan in place."

The source added, "He has his down moments but is doing everything he can to heal. He wants go back on tour at some point. He is eager to get back into shape."

Woods, who has undergone five back surgeries and five knee operations, is no stranger to making comebacks on the golf course after health setbacks.

Before the car crash, the father of two was rehabbing from a microdiscectomy surgery in December, his fifth back surgery in the past seven years. Woods, who had a spinal fusion in April 2017, also had his fifth arthroscopic procedure done on his left knee in August 2019. 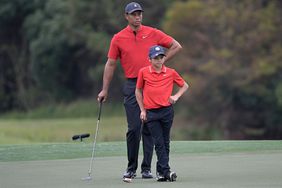 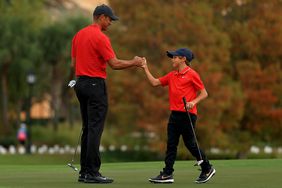