It was a moment most thought they’d never see again.

After years of being plagued by injuries and personal adversity, Tiger Woods earned his first major title in 11 years by winning the 2019 Masters Tournament on Sunday. The 43-year-old is now just one Masters win behind all-time great Jack Nicklaus, who’s won the tournament six times and holds the record for most overall major wins at 18, over second-place Woods, who has 15.

“It’s hard to comprehend right now. I mean, honestly, it’s only been a few hours out of winning the tournament,” Woods told CNN after securing the achievement. “I’m still trying to enjoy it and figure out that I actually won it.”

“I did think [this day] would come,” he added. “I knew it was in me. Did I know it was going to be this week? No. But I had a good feeling that the way I was [playing] that I was going to be in the mix… Fortunately, I was able to hit some of my best golf shots all week.”

Despite being confident he’d one win the tournament once again, cheers for Woods at the Masters were louder than those for any other golfer, likely because many in attendance recognized the improbability of the moment for the legendary golfer, whose career in recent years has been filled with more injuries and scandals than victories.

Injuries and operations have been a constant thread throughout Woods’ career, with his first surgery, to remove two non-cancerous tumors and scar tissue from his left knee, occurring in 1994, according to the PGA.

That was followed by a second operation to remove benign cysts and fluid from his ACL in the same knee in 2002.

While Woods would enjoy a few injury-free years following the procedures, he’d rupture the ACL in his left knee while running through a golf course after the British Open in 2007. More operations were performed on the knee before Woods underwent reconstructive surgery in June 2008, which caused him to take an eight-month hiatus from the sport.

He wouldn’t return until the end of February 2009, just before he was engulfed in scandal.

In November of that year, Woods crashed his Cadillac Escalade just after 2 a.m. outside of his Florida home, sparking speculation that he was having an affair after his then-wife, Elin Nordegren, used two golf clubs to shatter a window of the vehicle.

Woods’ many infidelities were made public in the weeks that followed, and he’d enter rehab for in-patient therapy dealing with sex addiction. For the first time in his career, Woods was at the center of a highly publicized scandal.

Woods and Nordegren then finalized their divorce in August 2010, and he would not earn another golfing victory until March 2012.

RELATED: Who Is Tiger Woods’ Girlfriend Erica Herman? Everything to Know

While Woods’ performance on the course suffered, his personal life was beginning to look up as he found love in champion skier Lindsey Vonn, who announced they were dating in March 2013. The romance was short-lived, though, as the power couple called it quits just two years later.

Woods underwent surgery to relieve pain in his back and leg in April 2017. It was the fourth operation to his back he’d have in five years.

“For the better part of four to six months, I had to be helped out of bed every day. And there were some days where you’d help me and I couldn’t stand up. I’d have to either just fall to the floor or just stay in bed,” Woods explained during an interview with ESPN.

RELATED: Tiger Woods Says the ‘Love and Support’ of His Kids ‘Means the World’ After Masters Win

Just as he was beginning to rebound from the sex scandal, Woods made headlines once again in May 2017 when he was found asleep at the wheel of a Mercedes near his mansion in Jupiter, Florida, and failed a sobriety test (though no alcohol was found in his system). He later plead guilty to reckless driving.

Around this time, though, Woods began dating current girlfriend Erica Herman, who has since accompanied him to many of his tournaments, including when he put on a tremendous showing at the World Golf Championships-Bridgestone Invitational at Firestone Country Club in August 2018.

Though he didn’t win, it was his best performance in years and a bright spot for fans to hold on to.

The following months, Woods won the Tour Championship, ending a five-year winless drought and paving his way to the Masters win on Sunday. 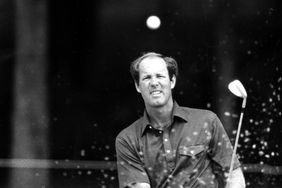