Soccer star Abby Dahlkemper eloped with husband Aaron Schoenfeld just days before she had to fly off to join the U.S. Women's National Team

Abby Dahlkemper had her dream wedding just days before jetting off to get back to work.

The U.S. Women's National Soccer team star is used to being in a long-distance relationship with love Aaron Schoenfeld, an American-Israeli soccer player who's spent time at clubs all over the country and overseas.

But the stakes were changed when Dahlkemper, 28, and Schoenfeld, 31, suddenly posted wedding pictures in early January, just weeks after announcing they were engaged.

"We just threw it together so quickly because we wanted it to be very us and seamless and not stressful, so we found this photographer who was local and she did great," Dahlkemper, who's partnered with Optimum Nutrition to stay match-fit, tells PEOPLE of their idyllic nuptials on the oceanside cliffs of Santa Cruz, California.

The couple trusted photographer Melissa Ergo for the intimate portraits, in which they exchanged rings and posed in front of the dreamy backdrop.

But just a few days later, Dahlkemper flew to play with the national team for a series of January games before joining her new team in Manchester, England. With Schoenfeld staying stateside to play for Austin FC, the couple had to spend the first few months of their marriage an ocean apart.

"It was really hard. I feel like getting married is just an extra bond and a deeper bond, so it was tough obviously, but we got through it," Dahlkemper says. "I've really been trying to stay present in my life and take it day to day. So yeah, we got through it and I've been able to see him now, so it's been great."

"It's been amazing," she tells PEOPLE. "Every day with him is just so easy. It's so helpful to have the same career path and to know on a daily basis what we are doing, and emotionally and physically going through. So he's not only obviously my husband, but he's my best friend and it's amazing. I'm really looking forward to our life together."

The athlete is also looking forward to the Tokyo Olympics this summer. She's a favorite to lock in a spot on the tough 18-player roster, and she's hoping her continued partnership with Optimum Nutrition will help her get through the grueling schedule.

"It's very important for me to know what's in a product, and have the highest quality in any product and Optimum Nutrition does that," she says. "So I'm really honored to be working with them and to authentically actually be using their products and standing by something that I use daily."

"I feel very fortunate to be working with Optimum Nutrition because their products are not only unbelievable, but the people at the company are just amazing humans," she says, "and just really genuinely good people that are trying to make the world a better place. They're providing amazing products, not only for high level athletes, hopefully going to the World Stage and competing there, but for everyday people too, just wanting to better their health and their life." 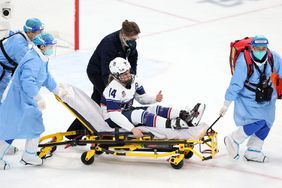 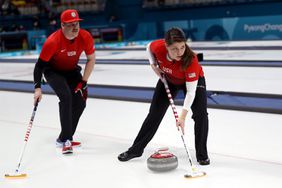