Simone Biles has confidence in her skills — but that doesn't mean she doesn't get nervous.

The decorated Olympic gymnast — who is promoting the upcoming Athleta Presents Gold Over America Tour (G.O.A.T.) tour — tells PEOPLE about deciding to start performing the challenging Yurchenko Double Pike in competition, saying that having an extra year to work on the vault amid the pandemic gave her the courage to try.

"Before it was just kind of working on that vault for my block, for my other vaults," Biles explains. "And then we got a little bit more serious. I was like, 'Okay, I think I can compete this.' And then that's where it landed us to last week and me competing it in competition."

Named after Natalia Yurchenko, a Russian gymnast who performed the stunt in the 1980s, the vault usually stops at a single flip. In Biles' case, however, she tacks on an extra flip, adding another layer of difficulty to the stunt. Until last month, no female gymnast had ever performed it in competition — and Biles didn't even plan to. She told PEOPLE in March 2020 that there was a "risk vs. reward factor" in attempting to do the trick.

But Biles landed it perfectly at the U.S. Classic in May. She tells PEOPLE now that while yes, she still gets nervous, she "felt a hundred percent confident in myself that I could do it safely and land it."

"[I knew] it was going to be fine because in training I had done it so many times," Biles, 24, continued. "I do it every other day. And for the last couple of months, shoot, I would say like four months we've done on competition surface. So I felt pretty confident."

Since accomplishing the feat, many have argued that gymnastics' scoring system does not accurately reflect the difficulty of the trick (Biles was given a provisional score of 6.6 at the U.S. Classic). While Biles admits that it does "suck" to have her hard work evaluated so low, she knows she can "still evolve" and is instead hoping to have the trick named for her.

After the close of the Tokyo Olympics this August, Biles will embark on the 35-city Athleta Presents Gold Over America Tour starting in September. The gold medalist will perform alongside fellow gymnasts including Laurie Hernandez, Katelyn Ohashi, Peng Peng Lee, Danusia Francis, Morgan Hurd and Jordan Chiles.

The tour, she tells PEOPLE, will be "fun" and include the crowd while celebrating empowerment.

"It's an all-star team of gymnasts," Biles tells PEOPLE. She adds, "It's a high-energy, pop music, gymnastics spectacular. ... There's a lot of excitement."

Continues the athlete, "And as gymnast, I think is really exciting because it's something that [audiences] never seen before, because every time we compete, it's definitely a different mindset, a different perspective in this will be just fun."

Tickets for the tour will go on sale to the general public June 11. For more information about the tour and for ticket information visit www.GoldOver AmericaTour.com. 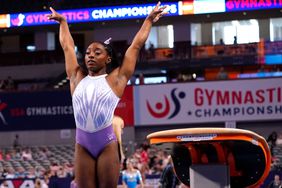 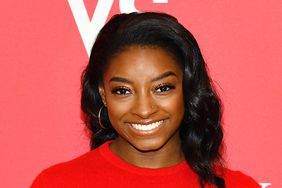 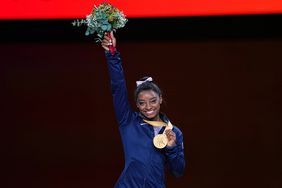