“I love your daughter, Suni, so much and I know how much she loves you,” Simone Biles said to John Lee before the gift was presented

On Wednesday, Today reporter Natalie Morales visited Suni's father John Lee to present him with a video message and the gift from Biles, 24.

"Hi, Mr. Lee, it's Simone. I love your daughter, Suni, so much and I know how much she loves you," she said in a video John watched from a tablet. "You have done so much for her so I reached out to my friends at the Today show to see if we could do something special for you. Hope you like it."

Morales, 49, led John down his driveway where his family members held signs that said, "We love you!" and "Thank you!" Next to them stood a man with an electric wheelchair from Quantum Rehab that had a bow on it.

"Oh, my God. Oh my, that is awesome," John exclaimed as the Today host explained that the wheelchair would be custom-fitted.

John suffered a spinal cord injury in 2019 after he fell off a ladder while trying to help a friend trim a tree, according to the outlet.

Since then, he's been using a manual wheelchair, often needing assistance from Suni's brother, Lucky. "Now you don't need me to push you anymore," Lucky exclaimed when John received the wheelchair gift from Biles.

John gave the new wheelchair a spin down the street.

"Well, this is amazing. Thank you, guys," Suni's father exclaimed once more.

DWTS: Suni Lee and JoJo Siwa Join Season 30 — and Siwa Will Compete with a Same-Sex Partner!

The 18-year-old Olympian had an emotional reunion on Today with her family in August after she won three medals: a gold in the individual all-around; silver with Biles, Jordan Chiles and Grace McCallum during the team final; and bronze in the uneven bars.

"I want to tell her team that no matter what, you all support her and I want to tell Simone that she truly is the GOAT because she let my baby girl bring the gold medal," he said at the time.

Speaking with reporters after she took gold, Suni said, "Coming into this competition, I didn't even think that I could be competing for a gold medal. I was coming to compete for a silver medal. To be here, it's crazy."

"I feel like this whole season I've been second to [Simone]," she added, noting that she tried not to "focus on it though" or else she "knew I would get too nervous."

Due to international spectators being barred from attending Olympic events in Tokyo, Suni's friends and family cheered her on from home. However, it was bittersweet not being able to share the moment with them in person. "This is our dream," she said of her father, who has been one of her biggest supporters. "It sucks that he couldn't be here."

Biles continues to be Suni's fan as she anticipates her teammate's upcoming competition on Dancing with the Stars.

Last week, Suni was confirmed as a contestant on the upcoming 30th season of the ABC dance competition show. Biles is all too familiar with the fight to get a mirrorball trophy after competing in season 24.

"I think she'll do really well," Biles recently told PEOPLE of Suni. "I think America will fall in love with her because she has such an inspiring story."

"I wish her the best, we're definitely going to be watching her as we tour," Biles added, referring to her Gold Over America tour, which will see the athlete travel across the U.S. with several gymnasts including Chiles, 20, and McCallum, 18.

Suni is the latest decorated gymnast to join DWTS. Along with Suni and Biles, Aly Raisman, Shawn Johnson East, Mary Lou Retton, Laurie Hernandez and Nastia Liukin have all competed for the mirrorball trophy. 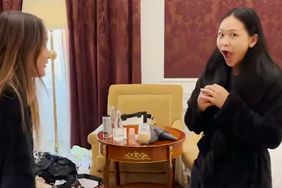