Simone Biles, considered one of the greatest gymnasts of all time, opened up about the long-term effects of sexual abuse she's dealt with in an episode of Facebook and Religion of Sports' Simone vs Herself

Olympian Simone Biles is one of the dozens of women who were sexually abused by former USA gymnastics doctor Larry Nassar, and the 24-year-old is speaking out in her Facebook Watch series about the trauma she's dealt with since.

In 2018, Nassar was sentenced to up to 175 years in prison for sexually abusing women and girls as a doctor at Michigan State University and for USA Gymnastics. More than 150 accused Nassar of abuse, including Biles and fellow Olympic gymnasts Aly Raisman, McKayla Maroney, and Gabby Douglas.

Many of the athletes accused Nassar of abusing them at Karolyi Ranch, a well-known gymnastics training camp in Texas. In the latest episode of Facebook Watch and Religion of Sports' Simone vs Herself, Biles spoke about her experiences at the facility and how Nassar — an osteopathic physician — often got access to her and other gymnasts.

"At the ranch, obviously stuff went down," Biles said in the episode, which began streaming this week. "It was always called our 'fifth station.' You had poles, vaults, beam, floor, then therapy was your last station to get your body taken care of."

"All those years, nobody ever told us what sexual abuse was," Biles continued. "So we didn't really feel like we were going through it or victims."

According to Indianapolis Star, Nassar performed "osteopathic manipulation" on his patients. The practice involves doctors using their hands to diagnose illness and injury. In her experience, Biles said she initially had a difficult time admitting she had been abused.

"A lot of us didn't go to school, we were homeschooled. So it's not like we had a lot of people to talk about it with," she recalled in the episode. "I remember asking one of my friends, 'Hey, have I been sexually assaulted?' and I thought I was being dramatic at first, and she said, 'No, absolutely.' "

"I said, 'Are you sure? I don't think so,' " Biles recounted during the episode. "Because I feel like in those instances, I was one of the luckier ones because I didn't get it as bad as some of the other girls I knew."

After accepting she had been assaulted by Nassar, Biles began grappling with depression.

"I remember being on the phone with my agent, and telling my mom and my agent that I slept all the time," Biles added during the Simone vs Herself episode. "Because sleeping was better than offing myself. It was my way to escape reality. Sleeping was like the closest thing to death for me at that point, so I just slept all the time."

Simone Biles Talks About Her Biological Mother, Going 'Hungry' as a Child Before Adoption

Biles is sharing her story to help other women and girls who may in danger of an abuser.

"With gymnasts, when you get injured, your heal time is four to six weeks, but then with something so traumatic that happens like this?" said Biles. "There is no four to six weeks, so it's hard for us to process that. There's like no time limit or healing time for it, so you just take it day by day."

Watch the full episode on Facebook, during which Biles also looks back on some of her past leotards and their meanings and her training now. 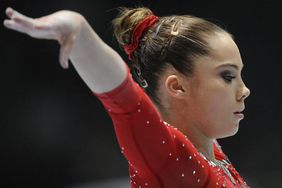