"I'd love to help other people going through these things," Simone Biles tells PEOPLE of speaking openly about mental health struggles

Simone Biles putting her mental health first at the Tokyo Olympics was a watershed moment for athletes around the world.

By choosing to withdraw from four out of five event finals in Japan to recover from the "twisties," the gymnast, 24, showed fans and fellow sportspersons — no matter the discipline — that the fitness required to compete is not only physical but also mental.

Nearly a month after winning bronze in her last Olympic competition of the pandemic-delayed Summer Games, Biles tells PEOPLE about prioritizing mental health in and out of a sports culture that has taught many to push through struggles to achieve peak performance.

"Sometimes when we speak on these things, then we become the face of it. I'm not sure if I'm completely ready for that aspect of it," shares the seven-time Olympic medalist, who has been expanding her business opportunities with sponsors, like Athleta, and partnerships, like her first NFTs.

The bigger the platform she acquires, Biles says she will become more and more outspoken about the importance of mental health. But for now, she's putting her own health before championing the cause.

"Obviously, once I am a little bit more open about it, I'd love to help other people going through these things because it is very relatable to know that they are not alone with it," the decorated athlete says.

"I think maybe one day but as of now, I have to focus on myself and getting myself right before I can speak and try to advocate for those things," adds Biles, who is a survivor of sexual assault.

Simone Biles Is Latest GOAT Athlete to Release NFTs with Tom Brady's Company: 'Why Not Join This Iconic Lineup?'

These days, Biles is focusing on relaxing after a stressful few years, including an extra year of Olympics training, which was brought on by the COVID pandemic and postponement of competitions.

"To be completely honest, pretty laid back," she says when asked how her state of mind has been as of late. "Not as busy as 2016, but the world is a very different place so I believe that's also the reason for that. It's been nice to decompress and be with my family, loved ones and friends."

Biles, who enjoyed a girls' trip to Mexico this month and quality time with her NFL boyfriend Jonathan Owens, recently had a candid conversation with her mother Nellie about her mental health.

"I wouldn't even say it started in Tokyo. I feel like it was probably a little bit deeper rooted than that," Biles told her mom about mental health concerns in a new AthletaWell video. "I think it was just the stress factor. It kind of built up over time, and my body and my mind just said no. But even I didn't know I was going through it until it just happened."

The Tokyo Games did not go the way she had hoped, but Biles also acknowledged the positive mental health awareness unfurled by her decisions in Japan.

"It just sucks. Train five years, it doesn't go the way you wanted. But I know that I helped a lot of people and athletes speak out about mental health and saying no. Because I knew I couldn't go out there and compete. I knew I was going to get hurt," she said.

Outside of the sports world, Biles revealed that Justin Bieber and Demi Lovato shared messages of support amid the events that went down in Tokyo. "No one kinda understands the platform that we're on," Biles told her mother about being a public figure with an immense spotlight on them.

The Tokyo Olympics marked a new chapter in Biles' life and career.

"Over the years, obviously, since I've been so dominant everybody supports the gymnastics and praised me for what I've done in the gym and not really outside," she said. "Then once I took a step back, I obviously was expecting to feel a lot of backlash and embarrassment. But it's the complete opposite. That's the first time I felt human. Besides Simone Biles, I was Simone, and people kind of respected that."

As she continues to strengthen her own mental health and advocacy, Biles shared the advice she's taken to heart.

"Don't be afraid to ask for help. I know it's not easy, but it really is helpful. And I know most of the time you're scared, you might feel dumb. But as I have learned over the years, it's OK to ask for help," she said.

"Just remember, you're also a person. I think even us as athletes tend to forget that because we're only known as athletes and not valued as human beings. But it's important to keep in contact with the human side of you," Biles noted.

Starting Sept. 21, Biles will be headlining the Athleta Presents Gold Over America Tour, a gymnastics competition-meets-concert experience where fans can watch their favorite stars perform some of their most famous routines. 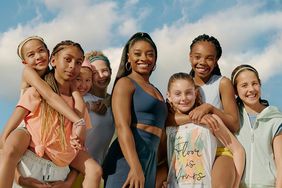