"In a way, you feel defeated because you've worked so hard," Simone Biles told Vogue of having to wait another year to compete in the Olympics

Simone Biles will be going for gold once again at next year’s Olympic Games in Tokyo, though the road to resilience will not have been an easy one.

The gymnast, 23, made her debut as a Vogue cover star for the magazine’s upcoming August issue, and opened up about the heartbreak she’s faced in having to revamp her plans to compete following the Games’ postponement to summer 2021.

“I felt kind of torn and broken,” Biles, the most decorated gymnast in World Championship history, said of learning she’d have to wait another year due to the coronavirus pandemic. “Obviously it was the right decision, but to have it finalized — in a way, you feel defeated because you’ve worked so hard.”

As Vogue notes, Biles, who has not lost a meet since 2013, is already “unusually” mature for an Olympian gymnast at 23 years old; next summer, she’ll be 24.

Simone Biles and Boyfriend Stacey Ervin Jr. Split After 3 Years of Dating: 'It Was for the Best'

The four-time Olympic gold medalist told the outlet that she broke down in tears as she thought of not only having to rearrange her training plans, but of having to work with USA Gymnastics for an extra year.

“We were gripping at the bars, and I just started crying,” she said. “Another year of dealing with USAG. That, I don’t know if I can take.”

Biles has been openly critical of USAG amid the sexual abuse scandal involving its former physician Larry Nassar. Biles was among the many athletes to describe her abuse at the hands of Nassar — who is serving a life sentence on charges of child pornography and sexual misconduct —and has been an outspoken voice for change within the organization.

In January, USA Gymnastics offered Nassar’s victims, including Biles, a $215 million settlement as part of a plan to exit bankruptcy, and last year, Li Li Leung, president and CEO of USA Gymnastics, praised Biles in a statement to PEOPLE that also declared the organization’s intentions to foster a "safe, positive and encouraging environment."

Despite Biles' setback due to the pandemic, and the fact that self-isolating meant her typical training schedule was thrown for a loop, Biles resumed training in mid-May after the World Champions Centre reopened, according to Vogue.

Though the athlete said in April that she was still undecided as to whether she wanted to compete, she has now determined that she does.

“I believe we’re going to come out of this stronger,” her mom Nellie told Vogue. “I believe next Olympics, it’s going to be, I got here in spite of. Once the athletes get back to training, I believe they will put more than their heart and soul into this. They will really have to prove that even this virus stopping the entire world will not take their goals away from them.”

Biles previously told PEOPLE in early March that she was particularly looking forward to spending time in the Olympic Village with her fellow athletes, and was excited about "being immersed in the Japanese culture." 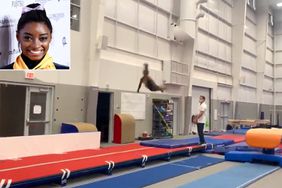 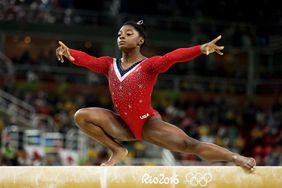 Simone Biles Opens Up About Experiencing Racism, Says Still Training 'as If' Olympics Will Happen