Serena Williams lost 6-3, 7-5 in straight sets against Elena Rybakina during the fourth round of the French Open on Sunday

Serena Williams' run at the 2021 French Open ended Sunday after she was defeated by Elena Rybakina in the fourth round.

The 23-time Grand Slam title holder, 39, lost 6-3, 7-5 in straight sets against the Kazakhstani 21-year-old. After falling behind in the first set, Williams attempted to recover in the second, but Rybakina proved victorious in her first career meeting with the American tennis star.

Williams' exit marks her 14th loss at the French Open, bringing her win-loss record to 69-14. Williams, who's won the French Open three times, hasn't passed the fourth round at Roland-Garros since 2016 when she was runner-up.

Serena Williams Scores First-Look TV Deal at Amazon, Set to Include New Docuseries About Her Life

Williams' next opportunity to score her 24th Grand Slam title will be at Wimbledon, which kicks off on June 28. "I'm kind of excited to switch surfaces," she said of Wimbledon's grass court after exiting Roland-Garros' clay court. "Historically, I have done pretty well on grass." Her 24th singles title would tie her with Margaret Court's record-setting 1973 achievement.

The world's No. 8 in women's singles is the latest top-10 pro to depart this year's French Open. Roger Federer bowed out Sunday due to concerns over his healing knee while Naomi Osaka withdrew from the tournament after she was fined for skipping a press event to preserve her mental health.

When not working on securing her next title, Williams has been teaching her daughter Alexis Olympia Jr., 3, the sport. "Honestly, we started because it's a socially safe sport, and when COVID happened, it was like, we're just in the house with a 3-year-old, what do we do?" she told PEOPLE in April. "There was only one answer, to my dismay."

Williams has also been filming a docuseries about her life and career, which will air on Amazon Prime Video after she signed a first-look TV deal with Amazon Studios. 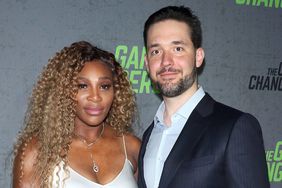