"Walking down the aisle was something that really made the wedding day that much sweeter," Samantha Cerio said

Samantha Cerio, the Auburn University gymnast who famously broke both knees during a collegiate competition in April, is opening up about her injury and life after the career-ending fall.

In a new interview with ESPNW, the 22-year-old graduate recalls dislocating both of her knees and tearing ligaments in both during her first floor exercise pass at the NCAA Regional Semifinal in Baton Rouge.

“I was in disbelief that some people found enjoyment in watching the video and being able to post it: ‘Oh my gosh, look at what this girl did,’ laughing at it,” Cerio said. “You go from this very high moment of seeing college gymnasts go viral for floor routines and getting 10s everywhere to a very stark difference when someone gets injured, and it’s not something people are used to seeing in the sport.”

Cerio’s injury was arguably one of the worst in her sport, something many viewers did not expect could happen, according to the athlete.

“People see us in leotards, they see us in makeup and done up and doing all these crazy incredible flips. And yeah, it’s dangerous, but do people really get hurt in it? That’s why it was taken a different way,” she said.

“You see basketball games where people get hurt or football games where players will get hurt,” Cerio shared. “It’s horrible altogether, but when you think of football and basketball, you think, ‘OK it happens all the time in that sport,’ but when you have something in gymnastics and someone gets injured like that, it’s like, ‘Oh my gosh, I didn’t know people in that sport got hurt like that.’ ”

In addition to focusing on her recovery, Cerio was also concerned with her unassisted walk down the aisle to wed husband Trey Wood at Alabama’s Fairhope Yacht Club, just two months after.

Following surgery, Cerio moved around in a motorized scooter and had large braces on her legs as she rehabbed her mobility and strength. Though everyday activities — such as getting out of bed and taking a shower — proved difficult, she prioritized physical therapy in order to walk again.

And first up was her Auburn graduation. Thanks to knee-strengthening exercises that targeted her quad muscles, calves and hamstrings, Cerio was able to walk with crutches across the graduation stage four weeks after her injury.

“That was something I wasn’t expecting, and I had a lot of people afterward who were like, ‘Good job, I’m so happy you were able to do that, you’re amazing, thank you for doing this,’ ” Cerio said of the raucous reaction she received from the crowd.

“It wasn’t just those that graduated. It was everyone. It was Auburn. It was the fact that the people of Auburn were able to see I was able to make this accomplishment and recover well,” she continued. “Their support is amazing, and it’s so cool to see how a community can band together and uplift people.”

Auburn Gymnast Who Broke Knees Says She Has ‘Many Positive Things Coming Up’: A ‘Small Setback’

Further hard work in rehab, as well as precision and focus, helped Cerio accomplish her No. 1 goal.

Cerio, who was an aerospace engineering major, lined up a job at Boeing before she graduated in May. 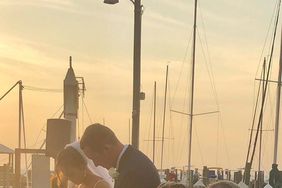 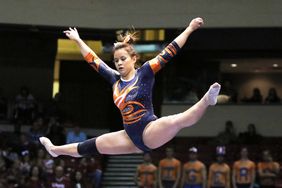 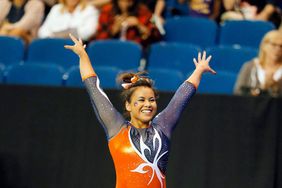 Auburn Gymnast Breaks Both Knees Attempting a Blind Landing: 'Nothing Ever Goes as Planned' 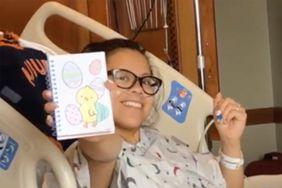 Fiancé of Auburn Gymnast Who Broke Knees Shares Video from Hospital: She's 'Having a Great Day'

Auburn Gymnast Who Broke Both Knees Should Make 'a Complete Recovery,' Coach Says

Gymnast Who Broke Knees Asks to Not Be Tagged in Injury Video: 'My Pain Is Not Your Entertainment'