Ronda Rousey also opened up about her home being robbed in April, just before her engagement to Travis Browne

Bride-to-be Ronda Rousey is planning a laid-back fiesta in the Aloha State.

The 30-year-old revealed some details of her wedding plans with fiancé Travis Browne during an appearance on Live with Kelly and Ryan Wednesday, saying that the ceremony and reception will be inspired by – and set in – the UFC fighter’s home state.

“He’s Hawaiian so we’re gonna do kinda like a backyard, Mexican Corona party — but, like, in Hawaii,” she explained.

Rousey and Browne, 34, got engaged this past April during a romantic getaway to New Zealand. She shared the news on Instagram with a hilarious photoshopped image of the two.

“It was actually after heavy rain and we were under this waterfall,” Rousey said Wednesday of the day Browne popped the question. “Apparently he had this whole speech prepared but it just went down into bullet points in the moment.”

FROM COINAGE: How Much Do Wedding Flowers Cost?

Continued the athlete, “So he pulls out the ring and I’m already like, ‘Uh huh’ before he even says anything. It’s like, ‘Okay, we’re in New Zealand, we’re under a waterfall, will you marry me?’ ”

The romantic moment was preceded by a scary incident, however. On the couple’s way to the airport, she said they briefly stopped by her home – where Browne planned to sneakily ask Rousey’s mother for permission to propose.

“Then, right when we got to the house, we realized we were robbed and someone had been squatting in my house for like three days, sleeping in my bed,” she detailed. “Stole my Olympic ring, stole my guns, stole all my precious jewelry, every headphone in the house – credit cards.”

Luckily, Rousey said she and Brown had security cameras in place and were able to find the alleged culprits at a nearby skate park with the help of police. 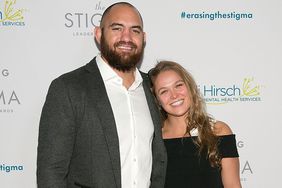 All About Ronda Rousey's 'Classic, Feminine' Wedding Gown: 'She Was So Giddy With Pure Joy'