Roger Federer had a full support system looking on from the stands as he took home his eighth Wimbledon men’s singles championship on Sunday.

The Swiss tennis star, 35, defeated Marin Cilic in three straight sets, 6-3, 6-1, 6-4. The win gives Federer the record for the most men’s titles in the history of the event, edging out Pete Sampras and William Renshaw, who each won seven titles at Wimbledon.

“It’s disbelief that I can achieve such heights,” Federer said after his match, according to ESPN. “I wasn’t sure if I was ever going to be here, in another final.”

Cheering him on from the stands was his entire brood: wife Mirka and the couple’s two sets of identical twins, daughters Charlene Riva and Myla Rose, 7, and sons Leo and Lenny, 3.

Earlier this year, Federer beat Rafael Nadal at the Australian Open. The two wins of 2017 bring him to 19 Grand Slam titles in his career.

RELATED: William and Kate Squeeze in Date Time at Wimbledon

As always, major celebrities were drawn to the All England Club for the tournament. Princess Kate and Prince William were front-and-center in the royal box. Pippa Middleton made her third appearance at Wimbledon, joined by her new husband James Matthews on Day 11.

The Duchess of Cambridge‘s younger sister, 33, and Matthews, 41, were all smiles on Friday at Center Court as they watched American player Sam Querrey’s match against Marin Cilic.

Also on Friday, Pippa’s mother, Carole Middleton, and brother, James Middleton, were spotted at Center Court cheering on their family friend Roger Federer, who advanced to the men’s finals after beating Tomáš Berdych. Sitting right in front of them was actor Bradley Cooper. 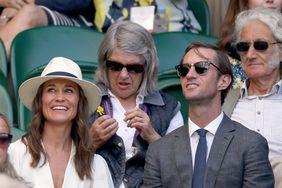 Pippa Middleton and James Matthews Attend Wimbledon for First Time as Newlyweds—and Bradley Cooper's There Too!