It's been a busy few weeks for Super Bowl LV champion Rob Gronkowski, but the NFL star still made time to celebrate another special event this month: Valentine's Day.

To commemorate the romantic holiday, the Tampa Bay Buccaneers player shared a tribute to his longtime girlfriend Camille Kostek on Instagram.

On Monday, the athlete, 31, posted a series of photos of the couple alongside a heartfelt message about the former Sports Illustrated Swim cover star.

"Happy Valentines Day to my baby @camillekostek one of the hardest workers I know, always cheering me on, always caring and always there for anything that I need!" Gronkowski wrote. "Keep #nevernotdancing my ❤️!!"

The tight end included pictures of the pair celebrating after the Buccaneers beat the Kansas City Chiefs to win this year's Super Bowl, giving Gronkowski his fourth Super Bowl ring.

In one shot, the couple is seen kissing on the field following the Bucs' win, while another photo shows the pair cuddling on a boat while Kostek, 28, wore her boyfriend's jersey.

Gronkowski additionally featured a cute photo of the pair riding a roller coaster at Walt Disney World together while both wearing Super Bowl LV champion gear.

Kostek also paid tribute to her boyfriend for Valentine's Day, sharing a similar photo of the couple getting cozy on a boat.

How Stars Are Celebrating Valentine's Day 2021

In the shot, Kostek is seen lying on Gronkowski's chest as he wraps his arm around her shoulder.

"My love my friend my valentine ❤️," she captioned the picture.

The model also showed her man lots of love while cheering him on at the Super Bowl earlier this month.

She wore black, shiny leather pants with a denim corset top and a cropped red jacket to the game. Kostek rooted Gronkowski on by sporting his name and number, as well as the Super Bowl LV logo. Gronkowski's jersey details were, of course, totally rhinestoned. The jacket was made by Rebel Britney.

Throughout the season, Kostek has supported Gronkowski on Instagram by posting plenty of photos decked out in Buccaneers gear.

Gronkowski and Kostek, a former New England Patriots cheerleader, have been dating since 2015. While he's been dominating the football field, she has been making impressive moves in her modeling career, winning the SI Swimsuit Model Search and being named a SI Swimsuit Rookie in 2018, and landing the coveted cover of the swim issue in 2019. 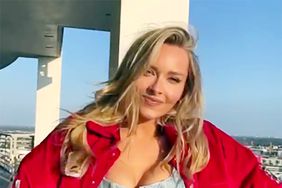 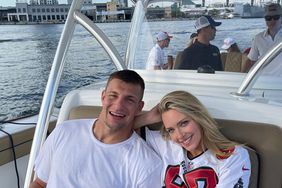 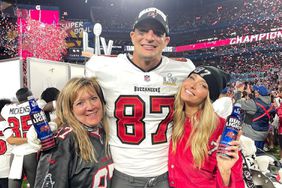 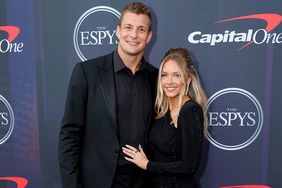 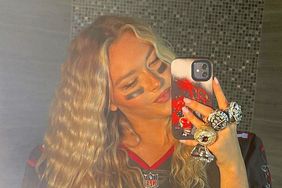