Ric Flair married Wendy Barlow during a ceremony held on the rooftop of the Pearl Hotel in Rosemary Beach, Florida

Ric Flair has put a ring on it — for the fifth time!

The wrestling legend, 69, married longtime love Wendy Barlow on Wednesday, during a ceremony held on the rooftop of the Pearl Hotel in Rosemary Beach, Florida, the couple confirmed to PEOPLE.

“Dreams do come true,” the said in a statement. Flair added to PEOPLE, “I married the love of my life yesterday.”

During the ceremony, which Flair partially livestreamed on Facebook, he wore a custom David Alan Black Label white suit. Barlow, 50, wore a gown with a form-fitting sparkly bodice and a tulle skirt.

Alongside the video, the groom excitedly proclaimed, “The day is here! WOOOOO!!!”

In an extra special personal touch, the 16-time pro wrestling world champion walked down the aisle to Offset and Metro Boomin’s song “Ric Flair Drip,” which is dedicated to Flair’s legendary love of bling.

TMZ was the first to report on the news.

On Thursday morning, Flair shared a handful of images of himself and Barlow from the happy day, simply captioning them with the date of the pair’s nuptials.

In one of the images, the couple held hands during the ceremony, while in another they cut into their three-tiered cake.

Ric Flair on Why He’s Not Proud to Admit He Slept with 10,000 Women: ‘I Don’t Want My Grandkids to Know’

Flair’s daughter Charlotte — who is WWE star herself — was also on hand to watch her father walk down the aisle.

RELATED VIDEO: WWE Legend Ric Flair in the Fight of His Life After Decades of Alcohol Abuse: The Health Scare That Tamed the ‘Nature Boy’

Sharing a photo of herself from her father’s nuptials, the SmackDown Superstar, 32, wrote, “Maybe you have to let go of who you were…. to become who you will be.”

In an interview with PEOPLE last year, Flair credited Barlow for helping him change his hard-living ways — including sleeping with around 10,000 women.

“I only love one now. I have never done anything since I met Wendy,” he told PEOPLE, adding that Barlow had been by his side since his health scare last August, when he was rushed to the hospital and spent time in a medically induced coma after being told he was on the verge of congestive heart failure.

“It’s still hard for me not to be me,” he continued. “But I’m really focused on getting well and just enjoying my life with Wendy.” 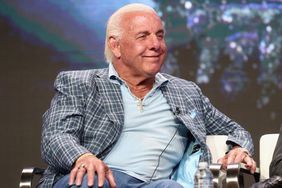 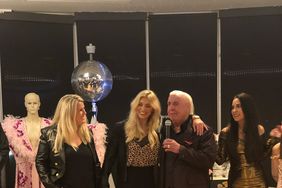