The New York Mets have draftedTommy Wilson, the son of actor Tom Wilson, who played legendary villain Biff Tannen in the popular Back to the Future series

Well looky what we have here!

Before the Major League Baseball First-Year Player Draft came to a close on Wednesday, the New York Mets scooped up Tommy Wilson, the son of actor Tom Wilson, who played legendary villain Biff Tannen in the popular Back to the Future series.

Tommy, who according to his college bio is a 6’4’’ pitcher who threw 78 strikeouts this season while playing for Cal State Fullerton, was drafted by the National League team in the 19th round, becoming the 560th overall pick. There are up to 40 rounds in the annual MLB draft.

Great Scott! Back to the Future Stars Reminisce at Mini-Reunion 30 Years Later

Celebrating his son’s epic accomplishment, the actor shared a sweet throwback photo on social media of his boy on the baseball diamond when he was just a child.

“Congratulations to my son Tommy, drafted by the NEW YORK METS!!” the proud papa wrote, adding perhaps in a nod to the time-traveling film that made him famous, ”This is a recent photo, because I swear I took it yesterday.”

Of course, that’s not the only time the actor has cheered for his son’s accomplishments!

An attendee at one of Tommy’s college games spotted the actor energetically supporting his son from the sidelines.

While some kids might be embarrassed to have a famous father, Tommy isn’t trying to hide the family connection!

In addition to sharing that he “hated baseball when he first started playing,” on his college bio the athlete shares that his dad “Thomas Wilson plays ‘Biff Tannen’ in [the] Back to the Future movies.” 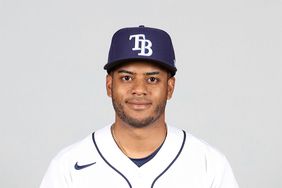