Tyson made the admission on an episode of his podcast Hotboxin'

Boxing legend Mike Tyson is revealing how he spends his earnings.

During an episode of his podcast Hotboxin’, Tyson invited rapper Jim Jones on to discuss the musician’s fledging cannabis business, Saucey.

When Jones explained that it made sense for him to invest in the marijuana industry considering how often he buys the product for his own personal use, Tyson then admitted that he spends a whopping $40,000 a month on marijuana, himself.

According to The Blast, Tyson, too, has invested in the cannabis industry, and is planning to open his very own ranch to grow high-quality strains of THC and CBD, while “implementing cutting-edge technology to advance the research on the health benefits of marijuana.”

According to The Blast, 20 acres of Tyson’s ranch is dedicated to agriculture, while another section of the grounds will be devoted to the Tyson Cultivation School, to help cannabis breeders learn the best techniques for growing their plants.

Mike Tyson: ‘I Want to Live a Positive Life’

“I thought about how much good I could do by helping people with cannabis. It was a no brainer,” Tyson told Cannabis Tech Today of his business.

According to GQ, Tyson engaged in substance abuse following his boxing career, and marijuana helped him steer away from harder drugs.

Mike Tyson Claims He Tried to Pay $10,000 to Fight a Bully Gorilla at a New York Zoo 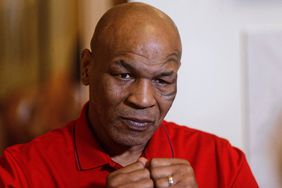 Mike Tyson Breaks Down While Discussing Life After Boxing: 'It's Empty'