"If you can't respect our national anthem, get the hell out of the country," said the former NFL coach of his "old-fashioned" stance on players protesting

Mike Ditka, a former NFL Hall of Famer and coach, is catching heat for his latest comments condemning kneeling athletes.

In an interview with TMZ Sports on Sunday, the 80-year-old sports figure voiced his staunch disapproval of athletes peacefully protesting by taking a knee during the national anthem. Ditka, earlier this month, was announced as the new face and chairman of the rebranded women's tackle football organization, the X League.

"If you can't respect our national anthem, get the hell out of the country," Ditka told the outlet. "That's the way I feel. Of course, I'm old-fashioned, so I'm only going to say what I feel."

On Twitter, Ditka faced backlash for his comments, as users called the remarks "racist" and "disrespectful." One person tweeted: "He made his whole career on using the very people who are now simply asking for equal respect. And he has some nerve to tell THEM to leave??? Why don't you go, Mike Ditka!!! Don't let the door hit ya on the way out!!!"

A spokesperson for the X League did not immediately respond to PEOPLE's request for comment.

This isn't the first time Ditka has shared his stance on kneeling, which was put in the spotlight by then–San Fransisco 49ers quarterback Colin Kaepernick in 2016. Back in 2017, Ditka claimed that there "has been no oppression in the last 100 years that I know of."

"All of a sudden, it’s become a big deal," the former Chicago Bears coach said in a radio interview at the time, according to NBC News. "Now maybe I’m not watching it as carefully as other people. I think the opportunity is there for everybody."

He then added: "I don't care who you are, how much money you make — if you don't respect our country, then you shouldn't be in this country playing football. … So I would say, 'Adios.'"

In a press release earlier this month announcing his X League ownership, Ditka said that he feels he has "left a legacy" that he stands by, on and off the field. The league is expected to kick off in April 2021.

"The game has given me a lot and I believe I have left a legacy I can be proud of both on the field and as well as the sidelines," he said. "Now from an ownership and executive perspective, I want to provide women a high-profile platform to compete against the greatest female athletes in the world while creating a destination league for millions of girls to aspire to play in."

Kneeling during sporting events has garnered newfound attention as professional sports resume amid the ongoing pandemic and Black Lives Matter movement. At several baseball opening games, players took a knee on the diamond. 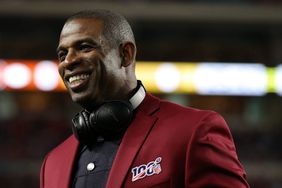