See Michael Phelps Open Up About His Anxiety Battle in New Film: 'I Just Didn't Like Who I Was'

Phelps is featured in Angst, a new documentary about anxiety

In a new documentary, Michael Phelps comforts a young fan experiencing anxiety by opening up about his struggles with the illness, which affects tens of millions of adults living in the United States.

The champion Olympic swimmer, 32, has become a prominent advocate for mental health over the years thanks to his candidness about his anxiety and depression, which caused him to have suicidal thoughts regardless of his record-breaking success.

“I just didn’t like who I was. If something was bothering me that would start to come up — and I would start feeling angry or depressed or upset — I would almost ignore it,” Phelps tells a boy with anxiety in the new IndieFlix original documentary, Angst. “I would shove it even further down, so I wouldn’t have to deal with it, so I would never have to talk about it. It got to my tipping point, where I just blew up. I couldn’t take it any longer.”

Anxiety affects about 40 million Americans over the age of 18, according to the Anxiety and Depression Association of America. The illness can arise from a number of factors — such as genetics, brain chemistry, personality and life events —and though disorders associated with anxiety are highly treatable, the organization says, less than 40 percent of suffers receive treatment.

Phelps, who was arrested for drunk driving in 2004 and 2014, has openly discussed his mental health in the past. While addressing an audience at George Washington University in May 2017, Phelps admitted he felt depressed at three different stages after competing in the Olympics.

“I remember sitting in my room for four or five days not wanting to be alive, not talking to anybody,” he said. “That was a struggle for me … I reached that point where I finally realized I couldn’t do it alone.”

While mental illnesses such as anxiety and depression can affect anyone, research by the Northern Ireland Association of Mental Health shows that athletes may be more susceptible to mental illnesses than the general population, due to factors such as injuries, competitive failure and overtraining leading to psychological distress.

Talking about his feelings, instead of keeping them bottled down, is what helped Phelps gain control of his illness, he says.

“I started talking about the things that I went through, and once I opened up about that and things I had kept inside of me for so many years, I then found that life was a lot easier,” he tells his young fan. “I got to the point where I understood that it’s okay to not be okay.” 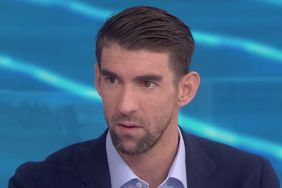 Michael Phelps Gets Candid About His Anxiety and Depression: 'I Just Didn't Want to Be Alive'