Magic Johnson and his wife Cookie are ringing in their 60th birthdays with a bang!

For day one of the celebration, which fell on Labor Day, Magic, Cookie and their kids EJ and Elisa Johnson hit up Nikki Beach.

The famous family jammed out to old school hits like Bell Biv DeVoe’s “Poison” while sipping on white wine.

Cookie and Magic were captured on video dancing in front of the DJ booth as people stood behind them waving cutouts of the letters “E” and “C.”

Cookie shared a photo of the moment, writing, “What an incredible start to celebrating our 60th birthdays yesterday, I can’t wait to see what Earvin has planned for tonight.”

“Hey everybody you good? I plan on laughing like this the whole week! I NEED this joy! Thank you & Happy Birthday @MagicJohnson & @TheCookieJ!”

For day two on Tuesday, Magic and Cookie kept the party going with a club event, which featured a performance by Doug E. Fresh.

Jennifer Lopez made an appearance at the bash and danced the night away with EJ.

Magic himself later took over the dance floor, swaying back and forth to Beyoncé‘s “Before I Let Go,” with his daughter Elisa.

The extravagant celebration came to an end on Wednesday with one final party.

For the finale, the couple opted for an outside, red rose-adorned venue that overlooked the French Riviera. Guests munched on o’dourves, sipped on champagne and enjoyed an acrobat performance all while a plane banner that read “Happy Birthday Cookie & Earvin” flew over their heads.

Magic shared a series of photos from their last hoorah, which shows Cookie dressed in a gold sequin dress and the former NBA star in a baby pink suit.

“Cookie and I are so excited to celebrate the final night of #EC60 with our family and friends,” he wrote.

Magic and his family have been in France since his birthday on Aug. 14. Cookie turned 60 on Jan. 20.

The birthday festivities come a few months after Magic abruptly stepped down as president of basketball operations for the Los Angeles Lakers — and he has no regrets.

In April, TMZ caught up with Cookie as she was leaving a restaurant with EJ and she told reporters “We’re just happy.”

“We’re just happy for him. No regrets.”

Magic made the unexpected announcement during a press conference on April 9 ahead of the final home Lakers game of the season against the Portland Trail Blazers.

“Today, I’m gonna step down as president,” Johnson revealed. “It’s the right thing to do, the right move to make.” 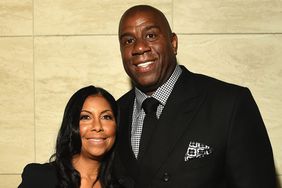