Lindsey Vonn and P.K. Subban are ending their engagement after three years together.

The former Olympian, 36, announced their split on Instagram Tuesday.

"Over the past 3 years PK and I have had some incredible times together. He is a kind, good man, and someone I respect a great deal," Vonn wrote, sharing a photo of the former couple.

"However, after much consideration we have decided to move forward separately," she continued. "We will always remain friends and love each other immensely. We ask that you please respect our privacy during this time."

The Olympic gold medalist, who retired from professional skiing in 2019 after a storied career that saw a record number of World Cup wins, began dating Subban, a defenseman on the New Jersey Devils, in early 2018. PEOPLE confirmed their engagement in August 2019.

Subban, 31, shared the same image on his own Instagram.

"Lindsey is one of the most kind and caring people I know. I will always treasure our time as a couple together and the many laughs we shared," he wrote, then adding the same statement as Vonn.

Subban proposed to Vonn at their Los Angeles home with an emerald ring, according to Vogue. He shared that he chose the jewel because Vonn’s favorite color is green and it’s his birthstone.

"I got the ring and said, ‘You know what? I’m just going to do it home,' " he told the magazine. "Everything kind of came together on that day. Everyone says the stars aligned — well, it was actually a full moon. I was worried because I knew she would want to be dressed up and not in her pajamas, and it just so happened she had a business meeting, so she was fully dressed up."

Vonn doubled down on the proposal, popping the question to her already-fiancé in a sweet Christmas surprise last December.

"Merry Christmas and happy holidays everyone!!" she wrote in an Instagram post. "On our 2 year anniversary I returned the favor and asked PK to marry me… and he said yes ☺️."

She continued: "We talk about equality but actions speak louder than words. Men should get engagement rings too and this is what PK deserves. Can’t wait to marry you babe ❤️?"

In the photos, the smiling couple wear matching striped pajamas as they pose in front of their Christmas tree with their dogs, who are also decked out in holiday attire.

Since then, Vonn has shared countless happy, loved-up snaps with her hockey player beau on social media working out, taking trips together and joking around.

"We're kind of in a holding pattern right now," Vonn said. "With COVID, it just feels like there's no good option, you know? I don't have a timeline or a plan, we're just kind of going to wait and see. Obviously, his family is in Canada, so I can't physically get to Canada and they can't get here. It'll happen eventually, we just don't know when."

Quarantining together throughout the pandemic, Vonn added, strengthened her and Subban’s relationship.

"It's been great for us. We've really enjoyed the time together, as much as one can," she said of quarantining with Subban and their three dogs. "When you're living together and you see each other every single day, 24 hours a day, you get to know each other pretty quickly. I think it's been good for us to really find out everything about each other, and I think we've gotten a lot closer throughout the whole process," Vonn explained.

Subban posted about Vonn on Instagram as recently as December 18, congratulating his then-fiancé on hosting the first-ever Sports Illustrated Sportsperson of the Year Awards. 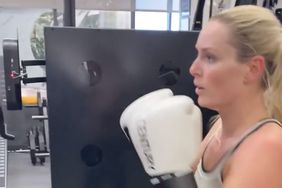