"Standing for the national anthem is something I will do...But that doesn't mean I don't respect and don't agree with what Colin Kaepernick is doing," said LeBron James

Athletes, coaches and entire teams are reacting to Colin Kaepernick‘s decision to protest the national anthem – and the long list of athletes that are following his lead.

LeBron James, who told reporters during a press conference that he’s worried about his children’s future in a disruptive America, says he’ll stand for the national anthem, but that he respects those who don’t.

”I’m all in favor of anyone, athlete or non-athlete, being able to express what they believe in a peaceful manner and that’s exactly what Colin Kaepernick is doing and I respect that,” James said. ”When I’m passionate about something, I’ll speak up on it, so me standing for the national anthem is something I will do. That’s who I am, that’s what I believe in. But that doesn’t mean I don’t respect and don’t agree with what Colin Kaepernick is doing.”

”You have the right to voice your opinion, stand for your opinion and he’s doing it in the most peaceful way I’ve ever seen someone do something,” he added.

San Antonio Spurs head coach Greg Popovich, who was named the USA basketball coach for the 2020 Olympics, spoke with members of the media on Monday about Kaepernick’s actions.

“…I think race is the elephant in the room in our country. The social situation that we’ve all experienced is absolutely disgusting in a lot of ways. What’s really interesting is the people that jump right away to say, one is attacking the police, or the people that jump on the other side. It’s a question where understanding and empathy has to trump, no pun intended, has to trump any quick reactions of an ideological or demagogical nature. It’s a topic that can’t just be swung at, people have to be very accurate and direct in what they say and do,” he said.

Popovich then went on to say that he respects the athletes that are protesting the anthem as a way to bring awareness to social injustice.

“I absolutely understand why they’re doing what they’re doing, and I respect their courage for what they’ve done. The question is whether it will do any good or not because it seems that change really seems to happen through political pressure, no matter how you look at it. Whether it’s Dr. [Martin Luther] King getting large groups together and boycotting buses’ or what’s happened in Carolina with the NBA and other organizations pulling events to make it known what’s going on. But I think the important thing that Kaepernick and others have done is to keep it in the conversation. When’s the last time you heard the name Michael Brown? With our 24/7 news, things seem to drift. We’re all trying to just exist and survive,” the coach said.

“It’s easier for white people because we haven’t lived that experience. It’s difficult for many white people to understand the day-to-day feeling that many black people have to deal with. It’s not just a rogue policeman, or a policeman exerting too much force or power, when we know that most of the police are just trying to do their job, which is very difficult. I’d be scared to death if I was a policeman and I stopped a car. You just don’t know what’s going to happen. And part of that in our country is exacerbated by the preponderance of guns that other countries don’t have to deal with. It gets very complicated.

Popovich said that if his players wanted to join the protest he would respect that decision.

“At this point, when somebody like Kaepernick brings attention to this, and others who have, it makes people have to face the issue because it’s too easy to let it go because it’s not their daily experience,” he said. “If it’s not your daily experience, you don’t understand it. I didn’t talk to my kids about how to act in front of a policeman when you get stopped. I didn’t have to do that. All of my black friends have done that. There’s something that’s wrong about that, and we all know that. What’s the solution? Nobody has figured it out. But for sure, the conversation has to stay fresh, it has to stay continuous, it has to be persistent, and we all have a responsibility to make sure that happens in our communities.”

And in another reactionary sports moment, members of the New Orleans Saints and Atlanta Falcons NFL teams gathered before a game on Monday.

Players from both teams stood at midfield when the national anthem played, locking arms to signify unity. 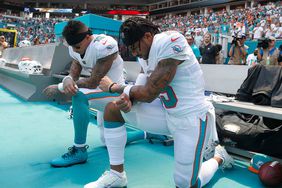 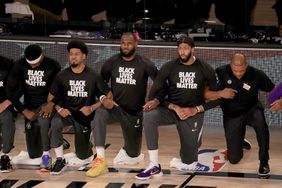 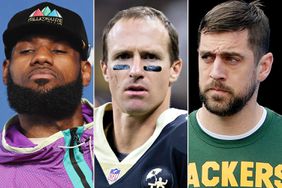 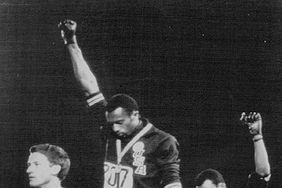 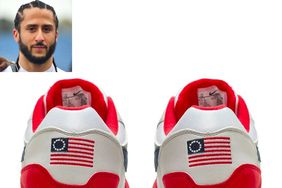