Lance Armstrong and his girlfriend Anna Hensen have some celebrating to do.

They have their arms wrapped around each other as Hansen shows off a sparkling ring.

Armstrong, who was banned from the sport of cycling after he admitted to doping in a 2013 interview with Oprah Winfrey, met Hansen nearly a decade ago.

The couple are parents to Max, 7, and Olivia, 6. Armstrong also has a son Luke, 17, and twin daughters Grace and Isabelle, 15, with his ex-wife, Kristin Richard.

Armstrong has dated a handful of high-profile women including Kate Hudson and Sheryl Crow.

In an interview with Howard Stern on The Howard Stern Show in March, he opened up about his relationship with the country music star.

“She’s a great lady. Obviously it didn’t work out, but I think and I hope she’s happy. I’m happy,” he shared of ending their five-month engagement in February 2006. “It’s tough to pull it off. I mean, how many couples have been able to pull it off? To her credit, she was a stay-at-home—one of the biggest rock stars—she was a great partner. She was at the races … it wasn’t like we never saw each other.” 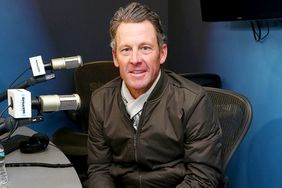