Kyle Stephens, the first of more than 100 women to testify about Larry Nassar's abuse, says her father did not believe her — and later died of suicide

For years, Kyle Stephens has been identified only as “Victim Z.A.” or “family friend.” But, last week, she stepped out from the cloak of anonymity and gave the first of more than 100 victim impact statements about the abuse she endured at the hands of former gymnastics doctor Larry Nassar.

Unlike the other victims, Stephens is not an athlete, but has known Nassar for most of her life. Her parents were close friends with the doctor, and Nassar began sexually abusing her in her own home when she was a kindergartner, she said during her moving testimony.

The abuse put a strain on her relationship with her parents, Stephens said, noting that her family initially did not believe her when she first told them about the abuse.

“[Nassar] tore us apart. He labeled me within my family as someone that was just a vile person,” Stephens said of Nassar during a Thursday appearance on Megyn Kelly Today alongside fellow victims Rachael Denhollander and Mattie Larson. “My dad had spent time in his life defending abused children. So the fact that his child would make such a heinous accusation with no pretense, really made me a target for [Nassar].”

Stephens was just 6 years old when Nassar first exposed his penis to her in the dark boiler room of his Holt, Michigan, home, explaining in court: “He told me, ‘If you ever want to see it, all you have to do is ask.’ ”

Stephens said in court that, as a young child, her interests were Clifford the Big Red Dog and the Junie B. Jones book series. She still had not lost all of her baby teeth when she was forced into her first sexual act.

Years later, when she was 12, Stephens told her parents about the abuse and her mother and father confronted their friend Nassar. Stephens said Nassar denied the abuse and “my parents chose to believe Larry Nassar over me.” She said her parents made her speak with Nassar about the allegations, and the predator allegedly told her, “No one should ever do that, and if they do, you should tell someone.”

After that, Stephens said in court that her relationship with her parents deteriorated, especially her connection to her father.

“His belief that I lied seeped into the foundation of our relationship,” she said. “Every time we got into a fight, he would tell me, ‘You need to apologize to Larry’ … I started to question whether the abuse ever happened. ”

As time passed, the Nassars began pressuring Stephens into babysitting their children, she said. When she was at their home, the family acted as if she never accused Nassar at all. Disconnected from her family, Stephens said she began doing all she could to pay for her own counseling, as she knew she could not ask her parents for help.

She ended up confronting her father about Nassar again when she was 18, before leaving for college. Her father, who later killed himself, finally believed her.

“My father and I did our best to patch up our tattered relationship before he committed suicide in 2016,” Stephens told the court through tears. “Admittedly, my father was experiencing debilitating health issues, but had he not had to bear the shame and self-loathing that stemmed from his defense of Larry Nassar, I believe he would have had a fighting chance for life.” 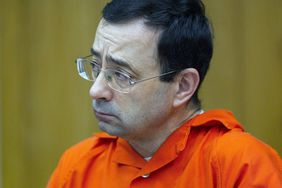