Olympic Figure Skater Kristi Yamaguchi on Daughter Emma's Love of Skating: 'It's a Great Activity for Her'

25 years after her gold medal win, Yamaguchi is still at the rink — this time, for her daughter

It’s been 25 years since Kristi Yamaguchi took home the gold medal for ladies’ singles figure skating at the 1992 Winter Olympics in Albertville, France.

And now, though Yamaguchi rarely laces up her skates, she’s passed the torch — to her 11-year-old daughter, Emma.

Though her own competitive skating days are long behind her, Yamaguchi tells PEOPLE she still spends four days a week at the rink with her daughter, who has been skating for five years. Whether she’ll follow her mom’s Olympic path is still up for debate, however.

“Of course at that age, there’s Olympic aspirations,” she says. “But I’ll say, ‘Okay, but you don’t really understand what goes into it yet!'”

No matter if her daughter goes on to winning a medal or not, Yamaguchi is happy Emma is connecting with the sport she loves.

“It’s great — there’s so many positive life lessons you can learn, even if you’re not competing at that elite level,” she says. “I don’t know if it will be her ‘thing,’ but for now, it’s a great activity for her.”

Yamaguchi admits she doesn’t join her daughter on the ice much, but is still involved in the sport. She’s hosted the Colgate Skating Series for many years, and on Saturday, the Nivea In-Shower Body Lotion Shall We Dance on Ice TV special — part of the series which she co-hosts with Shark Tank‘s Robert Herjavec — will air.

The on-air event not only features Yamaguchi, but also fellow gold medal-winning skaters Meryl Davis and Charlie White, as well as dancers Dmitry Chaplin, Chelsea Hightower, Tony Dovolani and Anna Trebunskaya. The next week, the Colgate Skating & Gymnastics Spectacular airs on Feb. 18, where Davis, White and Yamaguchi will be joined by 5-time Olympic medalist Simone Biles.

“We all identify with what we’ve been through, and obviously there’s mutual respect all around,” Yamaguchi tells PEOPLE of working with her fellow Olympians. “When you’re part of the Olympic family, you always feel that, even 25 years later.”

“I love that I can continue to be a part of it, through hosting these shows and remain an ambassador to the sport.”

The Olympics have become a tradition for Yamaguchi: She’s attended the Winter Olympics nearly every year since Albertville (with the exception being 2006 in Turin, Italy), and hopes to head to Pyeongchang next year, too.

“There are certain memories that are still very vivid from that whole experience,” she shares of her own Olympics experience. “A lot of the friendships made, you’re bonded forever. I met my eventual husband at the Olympics, as well. It’s incredible to look back.”

Though she’s still involved in the sport, Yamaguchi admits that she hasn’t been on the ice herself in several months. But with a skating show on the calendar for later this year to support her foundation — the Always Dream Foundation — which raises money for early childhood literacy, and pleas from her daughter, Yamaguchi plans on putting her skates back on in the next few weeks.

“I’ve been off the ice for several months, but I’ll get back to skating again soon,” she reveals. “My daughter loves it when I’m out there with her.”

She continues: “It is a lot harder these days!”

The Nivea In-Shower Body Lotion Shall We Dance on Ice special will air on ABC on Saturday, February 11 at 3 p.m. EST on ABC. 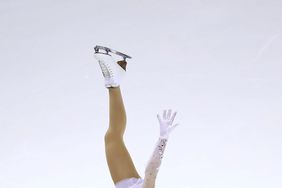 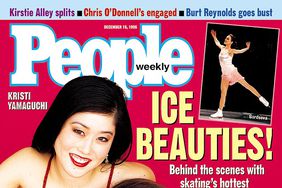