How Fans Are Honoring Kobe Bryant Around the World

Memorials were set up across the country to honor the late basketball icon and his 13-year-old daughter, Gianna

A fan waved a Los Angeles Lakers flag outside of the Staples Center in L.A., where a memorial was set up following the death of Kobe Bryant, 41, and his daughter Gianna, 13, in a helicopter crash early Sunday morning on Jan. 26, 2020.

Hundreds of fans gathered at the makeshift memorial that was created at the L.A. Live plaza in front of the Staples Center on Jan. 26.

Fans placed flowers, candles and memorabilia during a vigil for the late basketball star and Gianna.

The Staples Center, home to Bryant for his entire 20-year career, paid tribute with his photo set on a big screen with the year he was born (1978) and the year he died (2020).

Photos of Bryant and his daughter were surrounded by candles from morning to night.

A sand sculpture created by Indian artist Sudarsan Pattnaik is pictured here at Puri Beach in Bhubaneswar, India, with a message that says, "We will miss you."

Children played basketball - the day after the tragic news hit - at the "House of Kobe" gym, which was built in honor of former Laker's 2016 visit to Manila in the Philippines.

Outside of "House of Kobe," fans left flowers next to a mural of Bryant in the Philippines.

At the vigil held outside of L.A.'s Staples Center, fans stood around candles, flowers and memorabilia that were arranged to honor the star.

This aerial shot shows just how many people came out to pay their respects to Bryant and his family.

People were seen weeping and supporting each other as they mourned the loss of an L.A. hero.

While the mood was somber for most of the day, fans were also seen cheering for Bryant as the Staples Center lit up in Lakers colors: purple and yellow.

Australian tennis star Nick Kyrgios warmed up ahead of his Men's Singles fourth round match against Rafael Nadal wearing a No. 8 Kobe Bryant jersey on day eight of the 2020 Australian Open at Melbourne Park on Jan. 27, 2020, in Melbourne, Australia.

Luis Villanueva lit a candle in front of a Kobe Bryant mural in downtown L.A on Jan. 26, 2020.

A moment of silence was observed for Bryant before a game between the New Orleans Pelicans and the Boston Celtics at the Smoothie King Center on Jan. 26, 2020, in New Orleans.

Both of the athlete's retired jerseys were lit up throughout the 2020 Grammys, during which music's biggest stars shared their condolences and what they admired about the late athlete and his legacy.

No. 11 of the Atlanta Hawks, Trae Young, wrote "Kobe Bryant" with a heart on his shoes before facing the Washington Wizards at the State Farm Arena on Jan. 26, 2020, in Atlanta.

More flowers, candles, balloons and memorabilia were gathered in front of the Staples Center throughout the night in L.A. 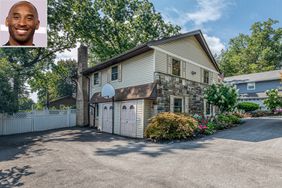 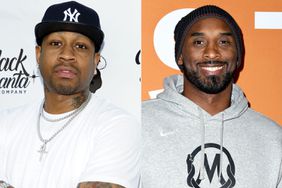 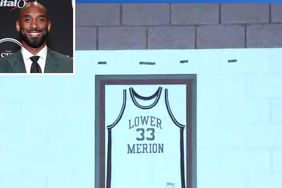 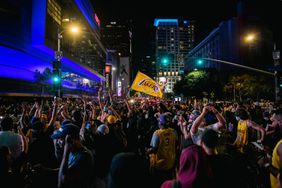 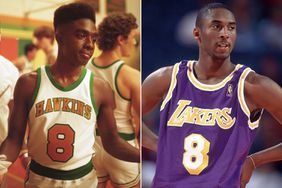 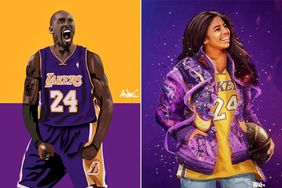