Soccer Star Kelley O'Hara on World Cup Win: 'We Always Expected' to Be 'Raising That Trophy'

Fresh off their World Cup championship win, O'Hara and the U.S. Women's National Team are heading to the ESPY Awards in L.A.

“I feel grateful for everything,” O’Hara, 26, tells PEOPLE. “I feel excited for the team and women’s soccer in general. I think that the women’s team is bringing attention to the sport and America is responding positively.”

“I have so much confidence in this team and I think we always expected to be there and to be raising that trophy,” she says.

O’Hara played a key role in helping the U.S. get to the Women’s World Cup Final, when she raced onto the field at the end of the game, slamming the ball into the net with a daring, mid-air kick and giving the team a commanding 2-0 lead over Germany.

“Everyone was like, ‘That was a Ninja kick – a running twirl thing,’ ” she says. “It was purely based on instinct. I saw (teammate) Carli Lloyd get to the end line and I knew I had to throw any part of my body in front of the ball to get it into the back of the net.”

O’Hara says she was “thrilled” to be able to help the team. “Getting that second goal allowed us to be like, ‘Oh my gosh. We are about to go to the finals!’ So it was very exciting.”

O’Hara and her teammates have been having fun celebrating their win, she says. New York City threw a ticker-tape parade for the team Friday – the first one for women since 1960.

“The parade in New York was incredible,” she says. “Inspiring people to look at their goals and go for that and believe in themselves is amazing. It’s just a really cool thing to be a part of.”

The festivities will continue Wednesday night, when the team heads to the ESPY Awards in Los Angeles, where they are up for Best Team.

O’Hara says she planned to spend the day getting ready for the big night. “Under Armour was sweet enough to get me a hair and makeup team,” says O’Hara, one of the stars of the brand’s latest sports bra campaign. “And Cynthia Rowley is sending a bunch of pieces. They were really sweet to send them overnight last night.”

When the team arrives at the awards show, “we will all be hanging out on the red carpet together,” she says. “We are all sitting near each other so hopefully when we win we can all rush the stage and accept the award. Fingers crossed!”

O’Hara says she will stop by the afterparty “to mingle with some of the athletes,” but has no plans to stay out late.

“I actually really want to get up tomorrow morning and go surfing,” says O’Hara, who was recently featured as one of the stars of the national Built with Chocolate Milk campaign.

“For me it’s just about that self-confidence and finding what you love and just chasing after it with reckless abandon and never letting anyone tell you that you can’t do something,” she says. “If you have a goal and you set your mind to it, you can absolutely achieve it.” 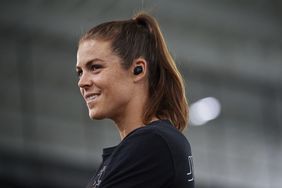 U.S. Women's Soccer Star Kelley O'Hara Shares the Music That Fuels Her on the Field