JuJu Smith-Schuster might have a future as a TikTok star.

During the Pittsburgh Steelers' opening game against the New York Giants on Monday, the wide receiver showed off his excitement when scoring a touchdown by getting down to a viral TikTok dance.

After making it into the end zone, Smith-Schuster performed the "Who's Next" dance, in which the athlete put his hands on one knee while rotating the other knee back and forth.

The Steelers star then pointed to the player next to him and shouted, "who's next," encouraging the other player to join in on the challenge.

While Smith-Schuster sang and danced without any music, the TikTok is usually performed to a song from Hip Hop Harry, an educational children's series, which would play when the kids would bust their moves in a dance circle.

The 23-year-old also held an impromptu photoshoot during his time on the field.

After scoring his second touchdown, the athlete laid down in the end zone and looked directly into the pylon camera at the edge of the field.

Smith-Schuster cradled his face in his hands while smiling at the camera and kicking his feet up behind him.

"@juju's 2nd TD turns into a photoshoot with the pylon cam 📸😂," the NFL captioned the hilarious video.

The Steelers defeated the Giants 26-16, with Smith-Schuster completing two of the touchdowns.

The athlete has been known to make fans smile — last year, the football star attended prom with a teenager, Anthony Molinaro, who invited the wide receiver over Twitter when his original date broke up with him.

“Got a DM from [Molinaro] a while back about needing someone to go with, decided why not, had a litty night at his school!” Smith-Schuster wrote on Twitter along with a set of pictures showing the two in matching green suits.

Many on Twitter praised Smith-Schuster for taking time out to fill in as Molinaro’s date, calling him a “role model” and a “leader in the community.”

“Another reason why you are a role model to the younger generation, keep it up!” wrote one user. 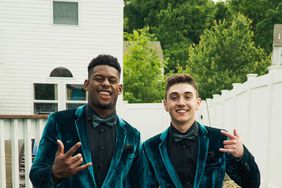 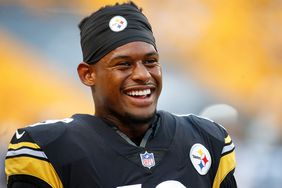 NFL's JuJu Smith-Schuster 'Having So Much Fun' Doing TikTok Dances on Field: I'm 'Being Authentic' 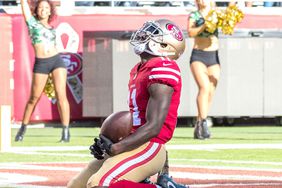 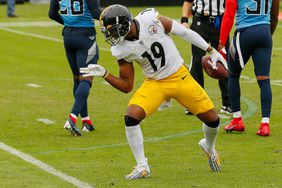 JuJu Smith-Schuster Gets Fined $5,000 for His Socks During NFL Game